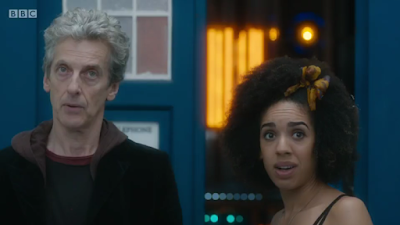 BBC drama, something I rarely watch, does seem (from comments I keep reading on various sites) to be an area of the BBC's output where the bias is especially blatant, and where certain kinds of messages keep getting pushed, often not very discreetly.

This week's episode of Doctor Who, for example (the one BBC drama I usually do watch - and which is very much back on form again), was intended by its 'showrunner' Steven Moffat to deal with the issues of racism and the "whitewashing" of history, and to do so by "bending history". As Mr Moffat put it himself, quite openly:

History is always whitewashed. How do we manage to have a diverse cast despite that? The way that we did it was … [to just] say that you will see people of different colours there. In fact, there were. People all didn’t arrive in the twinkle of an eye. It is bending history slightly, but in a progressive and useful way.

"Bending things in a progressive and useful way!" could be the BBC's new slogan, couldn't it?

The episode was set in 1814 in London, and this was an early bit of dialogue:


Bill: Wait, you want to go out there?
The Doctor: You don't?
Bill: It's 1814...[Pointing to her face] Melanin. Yes? Slavery is still totally a thing.
The Doctor (sadly): Yes, it is.
Bill: It might be, like, dangerous out there.
The Doctor: Definitely dangerous.

That is certainly "bending history slightly". It ignores some quite significant things in British history. The Abolition of the Slave Trade Act had been passed in 1807, abolishing slave trading in the British Empire. Patrols were sent to the African coast to arrest slaving vessels and captains were fined £120 for every slave transported. The West Africa Squadron, part of the Royal Navy, was established to suppress slave trading. By 1811, three years before the Doctor and Bill landed in London, slave trading was made a felony punishable by transportation for both British subjects and foreigners. So slavery was not "still totally a thing" in 1814's London, and this seems to have been "bending history" more than just "slightly"....

....but as the programme was doubtless also doing so "in a progressive and useful way", who cares if it's not entirely true and something of a slur on our country's history? Certainly not too many at the BBC I'd guess.
Posted by Craig at 18:05