As noted by Marianne on the 'Erdogan and the BBC' thread, last night's BBC One news bulletin seemed determined to make a point about 'the problem with referendums', with John Simpson - no fan of our own recent referendum result - taking a particularly negative view of the process.

Here's a transcript, with the relevant bits in italics: 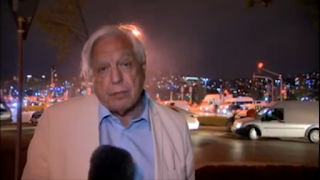 Newsreader: Good evening. Turkey's President Recep Tayyip Erdogan has declared victory in a controversial referendum granting him sweeping new powers. He said tonight that the country had opened a "new page" in its democracy. But opponents say the result amounts to one-man rule, with the President now able to abolish the role of Prime Minister and, if necessary, dissolve Parliament. It was a close vote, with widespread support for the constitutional changes in rural areas, but with many rejecting the proposals in the bigger cities, including Istanbul. Opponents are alleging voting fraud and say they'll challenge the result. John Simpson reports now from Istanbul.
John Simpson: Tonight, the victors were out in force, celebrating as though they had won by a big majority instead of by a whisker. In fact, here in Istanbul and in Turkey's two other largest cities, Izmir and in Ankara, the capital, the No campaign seems actually to have won. The worry is that the result has been too narrow to settle anything for good. The bangs aren't just fireworks. Those are guns being fired. The fact is that there is a big underlying level of nervousness and anger here, which, really, the result of this referendum, being so close, hasn't done anything to calm down. "Tayip Erdogan will be a world leader, God willing", says this man. "This is history, history!" However slight his majority in the referendum, President Erdogan has taken the decision to push through his far reaching constitutional changes and deal with any consequences.
President Erdogan: Today, the decision made by the Turkish public is an historic moment. This is not an ordinary decision. This is a not an ordinary day. It is a very serious change for Turkey's future."
John Simpson: Then he went out to speak to some of his supporters face-to-face. They chanted "Bring back the death penalty!" and he seemed favourable to that. His argument all along has been that only a really strong presidency can galvanise Turkey into being successful and wealthy. So he is getting rid of the old constitution's checks and balances, giving himself the power to hire and fire the country's judges, and he has made it possible for himself to stay as president until 2029. There had been one or two small opposition demonstrations but he's stamped down so hard on his opponents in recent years that they are reluctant to come out onto the streets in any great numbers. The Yes campaign may not have won the popular vote in the capital, Ankara, but tonight it held its celebrations, all carefully choreographed in advance. This has been indeed a day on which history was made. But it is likely to cut Turkey off further from its old allies in Western Europe and America. What we have seen today seems like a major change of course. 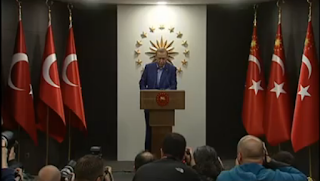 Newsreader: Well John, this appears to be a fairly narrow victory. 52% to 48%. How is President Erdogan going to bring this country of 75 million people together?
John Simpson: Actually Clive, I really don't think that he wants to bring people together very much, after all he's won this narrow victory by demonising the opposition, stirring up quite a lot of anger and sometimes a certain degree of violence in the country. I don't think he's now going to say, "Alright, you've got a viewpoint which we are prepared to listen to." I think he's just going to carry on, forcing through as he forced the referendum through. As for the opposition, what do they do? Well, you would have expected them to be right here in Taksim Square in the centre of Istanbul, where there have been so many demonstrations over such a long period. There's absolutely nobody here whatsoever. It looks as though the opposition, for the time being, is simply stunned by their failure to win. Most people in the opposition thought that they would just make it. So what do they do? Well, I think a lot of people are going to leave the country, they will go to the West in different ways and I think they are going to sit there. The last big demonstration that happened here by the opposition here was in 2013. And that was followed by deaths and a large amounts of injuries and I think the hearts, the stuffing, has gone out of the opposition altogether.
Newsreader: OK John, many thanks for that. John Simpson there in Istanbul.


Of course, they may very well be right about this referendum and its result.
Posted by Craig at 07:41