Going out with a bang 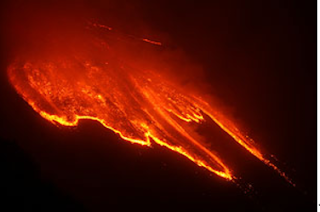 This morning's Broadcasting House featured the sound of Mount Etna just prior to its latest eruption as part of the programme's wonderful 'slow radio' segment. Paddy announced it as the sound of "rock melting".

It's an extraordinary sound and I would never have guessed it was the noise of lava in action had I not been told. It sounded more like a stream of reindeer bells flowing while a gargantuan reindeer stag panted periodically in the background. (Ed - Nurse!)

The programme ended, as promised, with the sound of what happened next (recorded by a BBC reporter): Etna erupting.

It also featured a correction from Paddy (which must have spoiled the fun for him somewhat): "A correction: Our slow radio was not "rock melting", and many listeners pointed out it was the sound of lava solidifying and then shattering".

Still, an extraordinary sound.
Posted by Craig at 09:39