Erdogan and the BBC 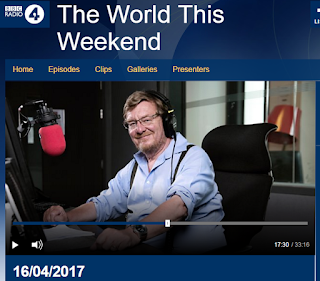 Listening to today's The World This Weekend was a little disconcerting.

They began with Turkey and Recep Tayyip Erdogan's referendum on whether to make him, as Hugh Sykes put it, Turkey's 'Super-President' or not.

As I've written before, it's struck me previously (whether rightly or wrongly) that the BBC used to give Erdogan a very good press, downplaying his early anti-democratic statements and previous Islamist declarations of intent, portraying him as an acceptable face of political Islamism, and, later, airing the case that Turkey's example might be a positive model for Arab Spring-struck countries to follow. But then, some time around 2013, Recep Tayyip seemed to fall from grace with the BBC. That came (it appeared to me) with the Geza Park protests, when crowds of liberal-minded Turks ('people like them') began flooding the squares of Turkey's cities and a woman in a red dress got tear-gassed. And, to my ears, the BBC's coverage has got ever less favourable towards Erdogan ever since.

Now that, of course, might be because Erdogan has got worse and worse as time has passed rather than because of BBC bias. That's a possibility that shouldn't simply be rejected.

What was so disconcerting about today's The World This Weekend, however, was just how far this has gone.

We had a Hugh Sykes report from Turkey which featured three critics of Erdogan followed by a Mark Mardell studio interview with a fourth critic of Erdogan. Supporters of Erdogan were conspicuous by their absence.

And there could have been a fifth critic - one of Hugh's friends - but she didn't want to be featured.

Balanced it most certainly wasn't then.

And the even more striking thing about The World This Weekend's coverage was that it had an extremely consistent angle: that Erdogan is a "populist"...

Well, there was Mark Mardell's introduction describing him as "arguably one of the  first leaders of a new populism now washing all over the world" and Hugh Sykes's report quickly asking "Is or was President Erdogan one of the first populists...long before Trump and Brexit?" before going on (near the end of the report) to explicitly answer this question by calling Erdogan "a populist president". 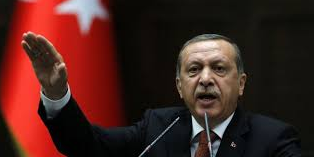 One of Hugh's Erdogan critics agreed that Erdogan was indeed was one of the first populists and "has become a very successful populist leader" (though he obviously didn't mean 'successful' to be take as praise for the president).

The second critic said that "some of the narratives that Erdogan is using also very much sound like other populist leaders in the US like Donald Trump in America and the far right in Europe - conspiracies, nationalism, a strong leader and a very us-versus-them society".

And at this point Hugh Sykes said:

If Erdogan gets his Yes vote he says he wants to bring back the death penalty. If he does that the door into the European Union will shut tight. My friend who's too nervous to talk to me on the record sounded a warning to all populists from the Turkish experience. If you encourage contempt for the educated elite you may end up sabotaging your country.

That sounded (to me) like Hugh getting his own point across (about 'populists', including those who vote for Trump and Brexit)...

...an impression reinforced by the fact that this statement was immediately followed by Hugh's final Erdogan critic agreeing with his absent friend that populism's "demonising" of elites is harmful and that this is where the Turkish president "starts to resemble the populist leaders in Europe and America".

President Erdogan is following this manual of right-wing populism. So he constructs a fear of internal and foreign enemies with an us-versus-them rhetoric.

Now, I'm presenting what I think is a very clear case of BBC bias here (in the strict sense of the term 'bias'), and I'm doing so even though I am entirely on 'the BBC's side' here, praying that Erdogan loses and that he then goes on to lose the next election to his secularist opponents. But even if BBC bias sometimes echoes my own feelings (as it sometimes does) that doesn't, of course, make it right....

....except - and this is, perhaps, the big question here - if the BBC is doing what many of us would support it in doing, namely standing up for democracy across the world.

Is that what the BBC are doing here? Seeing that Turkey is sliding into dictatorship and taking sides against the coming dictator? Or has Erdogan disappointed them by changing from the nice Islamist who bashes Israel into 'a new Trump'?

(As you can see I'm thinking aloud here. Please feel free to help me work it out!) 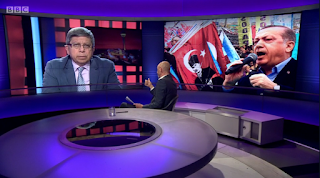 Incidentally, this programme took me unawares. I was already intending to write something sometime over this weekend about the fact that such thoughts had already struck me earlier in the week, specifically during last week's coverage of Turkey on Newsnight when Evan Davis chose to characterise President Erdogan as an "authoritarian nationalist" rather than as an 'Islamist'. I thought at the time that suggested (to me) that Erdogan is now considered 'a bad thing' at the BBC.

Evan's interview with Erdogan's chief advisor (an interview characterised by the Erdogan man repeatedly denying Evan's presentation of events in Turkey) was interesting, by the way, for the way it signalled just how unhappy Turkey is with the EU and just how much Brexit seems to be giving them even greater pause for thought about EU membership. Under Erdogan Turkey has become significantly more Eurosceptic. I'll avoid accusations involving 'tinfoil hats' by not suggesting that this could be another reason why the BBC might have fallen so far out of love with President Erdogan.

Maybe the BBC is being impartial here. And has always been impartial over Erdogan. That's certainly what the BBC would say. I've heard enough of the BBC's coverage over the past decade or so, however, to say that I don't think they have been impartial and that, flip-flopping, U-turning, they've gone from being quite sympathetic to the Islamist Erdogan to being antipathetic towards the authoritarian nationalist Erdogan. And, from my own personal bias against Erdogan, that's fine by me - except that, wearing my 'objective BBC bias blogger' hat, it also isn't all right by me.

Your thoughts would be greatly appreciated (if you've braved this post's tl;dr tendencies and made it all the way to the end).
Posted by Craig at 17:21