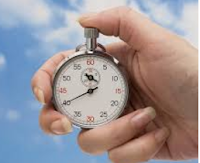 Our friends at the BBC are certainly worried about those 'stopwatches'. Nick Robinson famously doesn't like them (or calculators for that matter). And now it's Andrew Marr, writing in the Spectator, who appears to be hearing Time's wingèd chariot (in the form of a BBC bias watcher's stopwatch) hurrying near:

For broadcasters, the usual rules on being evenhanded could become ferociously complicated. If it is, as the Prime Minister says, our ‘Brexit election’ then you’d think we should give each side of that huge argument a fair crack of the whip. But if that looks like giving the Lib Dems and the SNP more airtime than their current parliamentary strength warrants, then both Labour and the Tories would strongly protest. Stopwatches will be brandished. For the next couple of months, life as a print journalist will seem a lot, lot easier.

Please excuse me while I ring for an ambulance as my heart has just started bleeding for Andrew Marr.
Posted by Craig at 20:29