For fans of stopwatches and calculators everywhere (2)....

And also continuing something we started last week (if you can stand the excitement)... 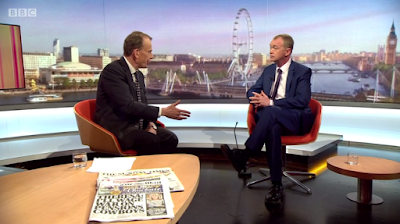 Slotting those into our new running total, that makes (in descending order of interruption activity from Mr Marr):

Congratulations to Paul then (so far)!

The Tim Farron interview looked at: His 'difficult first week', including the gay sex controversy; tuition fees; possible coalition deals; the number of seats the Lib Dems need; Tony Blair and a possible 'progressive realignment'; and Boris Johnson's sister switching to the Lib Dems (over Brexit). 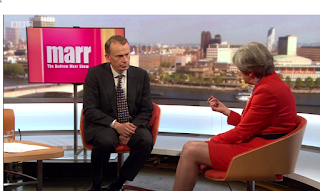 The Theresa May interview looked at: The use of soundbites (like 'strong and stable'); whether her government represents continuity or change of direction; cuts to public sector workers' pay; food banks; the effect of welfare cuts on working people; if austerity was a good thing; school funding cuts; the triple tax lock; social care; the pensions triple lock; Sir Philip Green; Brexit; the rich and tax; her views on the gay sex row; Tory election fraud; and if Jeremy Corbyn was right about the Iraq War.

Compare those with the one last week with Jeremy Corbyn: 37% on foreign policy and defence, 13% on party political matters, 8% on bank holidays, 19% on private v public in the NHS and schools, and 23% on Brexit).

This all rather takes me down to the 2010 election when I did a similar study of the final three Andrew Marr interviews with the (then) three biggest party leaders - Gordon Brown, David Cameron and Nick Clegg. The amusing thing looking at the stats from then and comparing them with the latest stats is that, both times around, process rather than policy dominated the interviews with the Lib Dem leaders, and Andrew Marr's interview with the Tory leaders concentrated most both times on the issue of cuts (it took up 67% of the David Cameron interview). He's certainly consistent in that respect!
Posted by Craig at 12:04