Looking at Twitter can be a depressing experience. Look at this extraordinary Tweet from disgraced ‘charity fat-cat’ and widower of murdered MP Jo.
Brendan Cox Tweeted a couple of days after the Westminster ‘vehicular attack’.

“Last few days has shown that the far right hate our country. They used a terror attack to denigrate it. They are no patriots.” 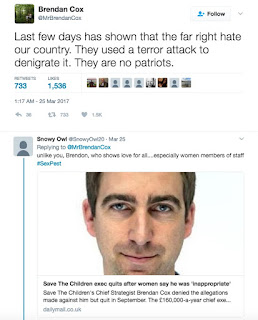 I stumbled upon it when I was looking at professor Steven Barnett ’s re-tweets. (Mar 25th) 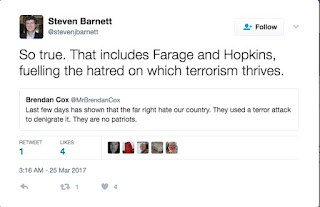 Also on that platform, amongst various references to “Hopkins” (He’s not a great fan) and Fox News, (not a fan) I spotted something by “the Secret Barrister” relating to Katie Hopkins’s spat with Jack Monroe and Laurie Penny, which, as  you are probably  aware, eventually cost Ms. H. a huge fine, (£131,000) the magnitude of which was grossly inflated through her intransigence. (she could have settled earlier with an apology and a donation of £5,000)

(Incidentally here’s something about another case I blogged recently, which might be of interest.)

Anyhoo, here’s the 'iNews' post about Katie H: "At £131,000, Katie Hopkins should realise trolling on Twitter is an expensive hobby"


Her intransigence. Whether or not you agree with the gist of her trolling (I often do - but not always) her intransigence was patently ridiculous, and reminds me of - you’ll be able to guess - Ken. No, not Dodd. The other one. Will he be getting a fine?
This is leading up to an excuse to advertise a number of posts about this subject, which I’m only going to link to, knowing that it’s a comparatively specialised topic that holds little interest for many, more’s the pity.

Paul Bogdanor: Ken Livingstone’s claims are an insult to the truth

Ian Austin: This is a moment of great shame, and we owe you an apology

and finally, Marcus Dysch again.:
Livingstone case has opened the floodgates for antisemites

It has allowed cranks and nutters, whose pathetic expressions were once dismissed out of hand, to feel as though they are part of normal society, and that the matter of Jew-hatred is open to the same sort of rigorous debate as Brexit, house prices and the football.
Mr Livingstone’s case has, to a large degree, normalised antisemitism. It is no longer a taboo subject. “

This is a meandering tale with no middle, beginning or ending, with perhaps only an indirect connection with the BBC, and I can’t even say I rest my case, because I don’t.
Posted by sue at 15:20