HARDtalk and the man on the Clapham omnibus

The BBC’s HARDtalk covers a vast breadth of issues. Stephen Sacker sweeps in on all sorts of scenarios and situations, tasked with confronting his prey with a set of penetrating questions designed to expose weakness or hypocrisy. He’s armed with several sheets of paper; perhaps he prepares his own notes or perhaps they are prepared for him by a research team.

Imagine a complex fraud investigation. Just like on TV.
An official body spends hours, days, weeks constructing a watertight case against a devious fraudster whose ‘business’ activities extricated thousands of pounds from customers who cannot immediately tell they’ve been swindled.
Evidence has been seized, statements and counter statements taken, character references concocted and a solicitor painstakingly prepares umpteen charges. Even as the case is ready to go to court the criminal activity is ongoing,
A learned barrister sweeps in from on high and after a cursory glance at the evidence and a last-minute tête-à-tête with the defence, a plea bargain is agreed. Guilty to half the charges and the rest - dropped. Just like that. The upshot: a suspended sentence, not a hefty custodial one as was hoped for.

Due to being parachuted in with little more than a sketchy overview and a necessarily limited grasp of crucial minutiae, Stephen Sacker is the BBC’s jack-of-all-trades who can only be master of none. (Like that barrister.)
Instead of a bundle of painstakingly prepared evidence, Sacker is only armed with his own research, or that of the BBC. He wades in, woefully ill-prepared, and achieve an inevitably unsatisfactory outcome. I felt this too about Sarah Montague’s interview with Kenneth O’Keefe.

They mean well, but they are only as good as the research they are armed with. They can succeed only as much as that famous passenger on the Clapham omnibus, should he decide to take on an argument he is not absolutely familiar with.

BBC Watch deconstructs the shortcomings in Sackur's interview with former head of UN ESCWA Rima Khalaf in far more detail than I can. They gave Sackur due credit for the challenges he did make, but like the fraudster in my analogy, Rima Khalif got away with most of her offences. 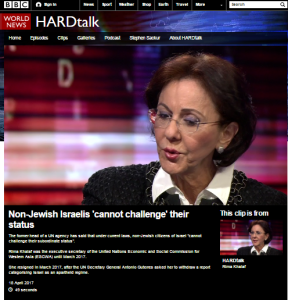 The woeful inadequacy of another Stephen Sackur episode of HARDtalk has also been mentioned elsewhere on the www. The interviewee was a staunch critic of Islam, the French philosopher Pascal Bruckner. Sackur’s principal argument seemed to be  accusing Bruckner of Islamophobia.

I watched Sackur’s latest episode, which was broadcast yesterday. The interview took place in northern Germany and was with the writer Nicklas Frank, the son of Hans Frank the brutal Nazi governor of Poland 1939-1945 who was “hung” (sic) when Nicklas was seven years old.

Rather than a confrontation, after all there was nothing much to confront Nicklas Frank about, this interview morphed into one of those heart to heart counselling sessions that Victoria Derbyshire specialises in.  The only hook upon which to hang a HARDtalk approach was to question the need for transferred collective guilt and the folly of taking responsibility of the crimes of others.

One point passed by without a challenge from Sackur, one I could really have done with. Nicklas Frank equated criticism of Angela Merkel’s generous refugee policy with the world’s inhospitable response to Jewish survivors of the Holocaust. A variant of the Kindertransport / refugee analogy. Interestingly, he also said that he fundamentally distrusted the German character because of a collective refusal to properly acknowledge the crime committed by Hitler (and his own father.) He said ‘the swamp has not been drained’.