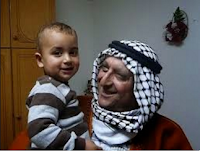 It is certainly true that impartiality can be hard to achieve, as Sue has always reminded me (in reaction to my far more rigid views on the matter). It's true because we humans aren't robots and because impartiality is a slippery concept and, as a result, it's far from unlikely that the BBC will keep on failing in that regard, even if they were always trying to behave themselves (which they most certainly aren't always trying to do!)...

...and it's also true that a broad, cross-BBC bias might inevitably come about (as it has!) if BBC employees tend to come from much the same demographic and mindset (as they do, often via the Guardian's recruitment page!).

I was wondering about all this in light of what I've heard of the BBC's Erdogan coverage in recent days - and especially after Mark Mardell and Hugh Sykes's latest discussion on today's The World at One.

Now, Hugh Sykes certainly got himself wound up this lunchtime in bizarrely contrived comparisons with Brexit (springing, no doubt, from his own views on Brexit) and only just managed to save himself by adding "possibly snobbishly" to his closing, loaded remarks about the Turkish referendum result being a case of "the educated for No against the uneducated for Yes" (and where have we heard that one before?)....

....but the really fascinating thing about this World at One discussion was Hugh's tone. I've never heard him sound so flustered on air before. He was babbling (eloquently of course) in a highly excited fashion at times and was so strongly inflecting his phrases with heavy tones of (unhappy) incredulity that his true feelings about events in Turkey could hardly have come across any louder or clearer - including his obvious view that what has happened in Turkey has been shabby, undemocratic and, all in all, a very, very bad thing.

And the thing is, from my point of view, that he's obviously dead right about that. It is a very, very bad thing, and he's absolutely right to be so upset (and biased) about it. (Erdogan supporters would naturally disagree about that).

So was Hugh being biased against 'evil' and in favour of 'good' here? If so, good on Hugh!

If they didn't engage in false equivalences between democracies (shall we say Israel perhaps?) and their totalitarian, terrorist enemies (shall we say Hamas perhaps?), wouldn't that always be the right thing for the BBC to do?

And what could be sillier than Lord Hall, say, telling us (as he notoriously did) that the BBC can't call Islamic State 'Daesh' because that's a "pejorative" term used about them by their opponents and, thus, that using it would mean the BBC taking sides?

Once again, I'm thinking on my feet here (though actually sitting down): Shouldn't the BBC be biased against President Erdogan if most people can agree that he's 'evil' and 'anti-democratic'?

Or would that give the BBC a blank cheque to pile on the opprobrium even more against anyone and everyone they consider undesirably 'populist' (from Trump supporters to Brexit supporters) - something that most people in the UK might not agree with the BBC about?

And, given how they already behave, wouldn't they keep on cashing that blank cheque day in and day out, making their bias even worse (if you can imagine that)?

As ever, your thoughts would be greatly appreciated. 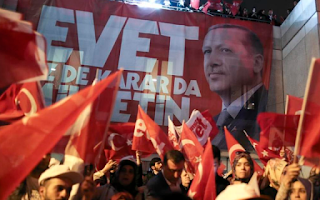 Anyhow, here's a transcript of that World at One discussion:


Mark Mardell: Within the past few minutes the Organisation for Security and Co-operation in Europe, which has monitored the fairness of a referendum, has described it as being conducted in an "uneven" way, with a misuse of government resources. Our correspondent Hugh Sykes is in Istanbul. You've been out and about this morning, Hugh. What's happening?


Hugh Sykes: Not a lot. Very little triumphalism. There was a bit of that last night, people roaring around in their the cars setting off fireworks. A lot of subdued despondency. I think the reality of this is only just sinking in. It's a bit like the day after the EU referendum in Britain last year. Brexit suddenly came into focus the next day. So people are being thoughtful and quite quiet. But the No side are furious. I mean, that description "uneven" is to put it mildly, from their point of view. They say that Yes played so dirty that they should have won an enormous margin. The Yes campaign got massive support from the government and from television. Imagine the government in Britain only supporting the Leave campaign and marginalising all the people who wanted to stay in the European referendum. It was very comparable to what that would have been like here. And the president is supposed to be above the party here. He certainly wasn't.  His face was on huge banners and billboards alongside that the word 'Yes' in Turkey 'Evet', and the No campaign got hardly any television airtime. There were few, if any, No political broadcasts and dozens for Yes. And to cap it all...They must...they really were desperate at the end. They thought they were going to lose, the Yes side. The prime minister tried to smear No voters by saying that voting No would be tantamount to supporting terrorism. "You're with us or you're with the terrorist." That remind you of anybody?


Mark Mardell: But given that sense of powerlessness from the opposition. do they stand any chance of stopping that, even with the sort of support of the OSCE?


Hugh Sykes: Well, it's a moot point, isn't it? They are going to appeal to the Supreme Court. Will the Supreme court by the time they appeal have been stuffed with Erdogan supporters, and that it doesn't stand a chance? But the appeal would be about the the ballot form decision, this very strange (at the very least) decision by the Electoral Commission last night...said in the middle of the count that they'd accept ballots with no official stamp on them...they are supposed to be stamped, every single ballot...and ballots in unsealed envelopes...every ballot's supposed to be an envelope that's sealed. otherwise it's fishy, and if it's not actual fraud there's plenty of opportunity for it. There's a really bad cloud of doubt hanging over such a tight result. The leader of the Republican People's Party (CHP), Kemal Kılıçdaroğlu, commented above all this, "You can't change the rules of the game in the middle of a match".


Mark Mardell: Doesn't sound much chance of a very divided society coming together?


Hugh Sykes: No, it's completely split down the middle. I mean, 51-49. It's not exactly a resounding victory for Yes. And if you look at the map there's a stark colour difference between the Yes places - Istanbul - sorry, I beg your pardon - beneath the No places - Istanbul, Ankara and prosperous industrial and tourism centres along the coast, the south coast and the west coast like Izmir - against the people of the hinterland, against Anatolia, characterised by some, possibly snobbishly, as "the educated for No against the uneducated for Yes."