Ever since the election was announced I have been avoiding bias-watching and blogging about political programmes. It’s not that I’m not interested, I certainly am. It’s just that I’m incapable of separating my subjective political views from the business of critically objective bias-watching.
I find it hard to leave my views at the door, so to speak, and as you’ll have noticed, the stop-watch department is in the hands of my co-blogger.

However, there are certain things that I might as well get off my chest. The only credible party at the moment is of course the Conservative Party. That goes without saying. But there are certain things that Theresa May has said that have me deeply worried. Policy issues.
One is her bizarre insistence that it’s only when violence is incited or is being plotted, or after it has taken place that we need to be concerned about Islamic extremism, let alone take action against the perpetrator. It’s plain stupid. As politicians are wont to say - “What kind of country do we want to live in?”

The  other matter is the ring-fencing of international aid. I don’t even think it’s a vote-winner.
I watched Charlie Webster talking about her near-death experience from a malaria-related complication, and her heartfelt appeal for aid towards malaria prevention, worldwide. She said eradicating malaria is not only do-able, but in the long-term, completely cost-effective. I understand she spoke about this on Capitol Hill recently. 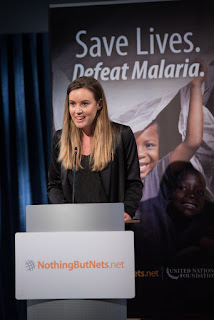 I’m sure there are other worthy causes we might support, and I have no problem with the government aiding genuinely humanitarian causes.
However, the waste associated with present arrangements concerning the distribution of our foreign is shameful. On The Conservative Woman Karen Harradine has written a powerful two-part study of how the DFID money is really spent, which you must read. That topic would make a terrific BBC investigation. You’d think they’d snap it up before Channel 4 gets its hands on it.

Not only the £800 that is being paid (from your money) by the PA as a monthly salary to the murderer of British student Hannah Bladon who happened to be travelling on the Jerusalem light railway when she was stabbed to death by a disgraced and certifiably insane Palestinian man who believed  the act would give him “a way out of his problems”. Which it did - so, not quite so insane after all. That’s Mahmoud Abbas’s peacemaking strategy for you; his preparation for Statehood.


That particular abuse of foreign aid is absolutely appalling, but it’s not the only abuse Ms. Harradine exposes. The widespread corruption and misuse of British taxpayers’ cash is truly shocking. Do read both articles, part one here and part two here.
Posted by sue at 14:49