The BBC and grammar schools 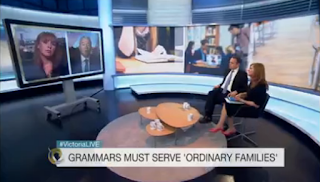 In his Mail on Sunday blog, Peter Hitchens was characteristically scathing about our 'sleek elite' and their 'hatred' for grammar schools, and he didn't leave the BBC out of that criticism:

But so have BBC persons, whose own education was privileged and who no doubt wangle their offspring into elite alleged comprehensives. Why else did the Corporation spend the whole of Thursday cramming the airwaves with the haters of grammar schools?

That "spent the whole of Thursday cramming the airwaves with the haters of grammar schools" is quite a charge, so I thought I'd test it. Is there any truth to it?

Well, Thursday's Victoria Derbyshire closed with a three-way discussion about grammar schools which took my breath away (though only figuratively-speaking. My breathing actually remained much as it usually is throughout).

The guest list consisted of Lee Elliot Major of the Sutton Trust, Labour's Shadow Education Secretary Angela Rayner, and Malcolm Trobe of the Association of School and College Leaders.

Unbelievably, given that you'd think that the BBC would at least try to maintain some pretence at balance on such a contentious area of domestic policy, all three of them were unenthusiastic about grammar school expansion. The only difference was the degree to which they were unenthusiastic, with Malcolm Trobe and Angela Rayner being wholly against grammar schools in principle and Lee Elliott Major "pragmatically" tolerating their continuation, albeit with "deep reservations". 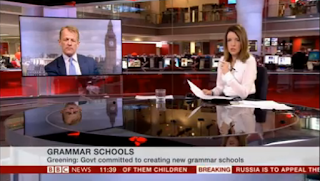 The following hour's BBC Newsroom Live on BBC Two (not available on the iPlayer) featured interviews with Ed Dorrell of the Times Educational Supplement, who said that grammar schools are "not helpful" in terms of social mobility and later in the hour came strong anti-grammar schools ex-Lib Dem minister David Laws, making the case against grammar schools even more vigorously over both educations standards and social mobility.

That night's Newsnight did have a supporter and an opponent of grammar schools - Phillip Blond and Polly Billington - but they weren't on to discuss grammar schools and so didn't discuss them! (Evan asked them not to).

The previous night's Newsnight, however, saw David Laws (again) being asked by Evan Davis, "Grammar schools. The evidence that they don't work. Just give us a snapshot of the argument that they're a distraction from the government" - a snapshot Mr Laws was only too happy to give. The other studio guest, academy founder Jo Saxton, given a "right of reply", was hardly a proper counterbalance, sounding fairly lukewarm on grammar schools herself, what with her own school being non-selective.

In passing, by the way, we've aired before concerns that Newsnight's Chris Cook may not be an entirely neutral commentator (to put it mildly) when it comes to grammar schools, so it wasn't exactly surprising to find him being negative about them during the preceding Newsnight report: "We also know that areas with grammar schools - another government idea - don't do any better than other places", he said. 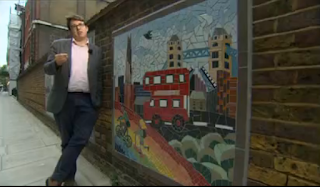 This snapshot of one BBC channel's coverage of the grammar schools story on Wednesday night and throughout Thursday certainly does seem to back up Peter Hitchens's point about the BBC's coverage. But it is only a snapshot. Was the BBC as biased across the whole range of its huge output?
Posted by Craig at 07:43