Brendan (extra Brownie points for not being a Jew) O’Neil has written a hard-hitting but amusing blog on “Jewish News”.
It’s about antisemitism on campus again.  “This never-ending meltdown over Israel is the distress of fools” is the title.
You see, Mark Regev, the former spokesman for the Israeli Government and now Israel’s Ambassador to the UK, was invited to speak at SOAS about the prospects for peace in the Middle East. 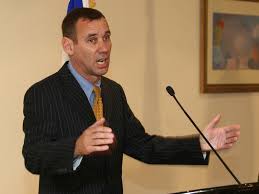 However, the good folk at SOAS feared his presence on campus would cause “substantial distress” to the SOAS community.

O’Neil alludes to the “cravenness”  of academics who demand the silencing of speakers they disagree with and call for the expulsion from campus of anyone who “thinks differently from them” and he writes:

“The irony is that anti-Israel activists talk about “Israeli Apartheid”, yet they enforce a discriminatory system against all things Israeli. They treat that nation’s professors, artists, politicians and produce as poisonous almost, liable to warp minds — or cause substantial distress — and therefore deserving of censorship or destruction. They single out Israeli people for nasty, censorious treatment, and then have the front to accuse Israel of having apartheid attitude.”

These are worthy arguments, and the recent descent into snowflakery in the academic world almost beggars belief.

However, there is one aspect of this that we shouldn’t  overlook.
Fist of all we might ask - Who are the people who would be so distressed at the sight of Mark Regev?

If they’re from a cultural background that traditionally hates and fears Jews, no amount of verbiage from a Jewish Israeli will bring them round, whether it’s about the prospect of peace in the Middle East or anything else under the sun. Their hostility is irrational and innate and they will cling to it come what may.
The ones that don’t come from such a background, but are nevertheless distressed by the sight of Israelis on campus have been seduced by the sheer passion of those that do, and in the absence of any rational counter-arguments from the likes of the BBC they, too, have abandoned reason.

(Who truly knows the depth of their distress at the sight of Mark Regev?)

Test this argument by supposing that the speaker in question was a hate-preacher. Should, say, Abu Bakr al-Baghdadi be given a platform on campus? (It’s not such a wild supposition, is it?)  One might indeed wish to no-platform such a person for fear that his passion would persuade or seduce the more vulnerable members of the audience. (If that’s too far-fetched to imagine, think of those gatherings of Palestine Solidarity types who routinely eject Jews asking awkward questions.)

I don’t relish the thought of, say David Irving’s ideas being given exposure and I’m not ecstatic at the thought of Professor Ilan Pappé and Ghada Karmi influencing gullible students at Exeter University. But there it is. They’re there and there’s nowt I can do about it.

No, the ridiculousness of the SOAS position is not merely a question of no-platforming people who disagree with or think differently from the SOAS community. They don’t merely ’disagree’ or  ‘think differently’. They hate Jews, therefore they hate Israel. Their distress is caused by the prospect of their fear and loathing being exposed for the sheer irrational racism it is.

The eventual outcome of Mark Regev’s night at SOAS was positive. Outside, there were demonstrations by both sides, but the actual event passed without incident. Read Mark Regev’s piece  “Why I accepted invitation to speak at SOAS to put forward Israel’s case.” The fact that he even needed to explain why he accepted the invitation says a lot about the atmosphere on campus, and the fact that he knew it was up to him to put the case for Israel says a lot about the BBC.