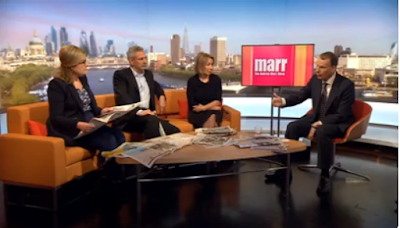 There was an amusing moment on this morning's The Andrew Marr Show where Andrew Marr 'got schooled' (as people say these days) on the question of impartiality by Bénédicte Paviot of France 24. They were discussing possible scenarios for the second round of the French presidential election, when the following exchange took place. The BBC man's subsequent "OK" sounded rather sheepish to my ears, as if he'd taken her point:

Andrew Marr: What strikes me is that if it's Macron versus Le Pen in the second round, then he doesn't really have an ordinary party and we're not absolutely sure whether he can get the votes out in numbers. Le Pen has a very formidable old-fashioned vote-gathering machine in the Front National. Is there, therefore, not a danger that if Macron makes it against her she then wins on the second round?
Bénédicte Paviot: Yes, there is indeed some would qualify (sic) as 'a danger'. Others would qualify it as 'a hope', and they'd be quite happy because....But the fact of the matter is...
Andrew Marr: OK.