Addendum to the Open Thread 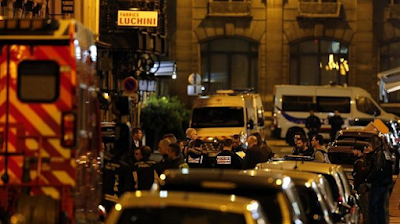 Following up on comments on the Open Thread about the BBC's reporting of the latest Islamic terror attack in Paris...

Checking Newssniffer (and converting from UTC to BST):

The BBC News website first reported the attack at 21:05 last night, saying "The motive for the attack was not immediately known".

At 22:15, they added "French police warned the public not to spread rumours".

At 23:25 they dropped ""The motive for the attack was not immediately known" and added "Witnesses say they heard him shout 'Allah Akbar'".

At 00:35 they dropped "French police warned the public not to spread rumours".

Last night' s BBC One News bulletin (23:50), which featured it as its third story, reported it like this:

Police in Paris say a man has stabbed several people, killing one person and injuring others, before being shot dead by security forces. President Emmanuel Macron praised the efforts of the police who he said had tackled the terrorist. Andy Moore has the latest.


The immediate aftermath of the attack. One person lies motionless on the ground, others flee in terror. There was panic as people ran inside cafes and restaurants for safety. Police in Paris were already on a high state of alert. Their response was swift. The knifeman was reportedly tasered by police before finally being shot dead. Witnesses said he was shouting, "Allahu Akbar" - 'God is great'. This woman said she was having a drink with friends, when she heard "boom boom", which she thought were gunshots. She got closer and saw a man lying on the floor. Counterterror police are leading the investigation. The Islamic State group has claimed responsibility. Police said five people were attacked. One was killed, two were seriously injured, and two others slightly wounded. Andy Moore, BBC News.

Using TV Eyes, the attacker's use of "Allahu Akbar" was thereafter mentioned once or twice each hour overnight and then once each hour during this morning's Breakfast. It wasn't mentioned, however, in The Andrew Marr Show's brief news bulletin or in The Sunday Politics's brief news bulletin but there have been several further mentions on the BBC News Channel since 9 am. And, like the earlier bulletins, BBC One's early afternoon  bulletin (13:00) didn't mention it:

Police in Paris say a 21-year-old man who killed one person and injured several others in a knife attack last night was on a list of people thought to be a threat to national security. So-called Islamic State has claimed responsibility for the attack by the man who police say is a French citizen born in Chechnya.