The Sunday Morning politics shows were dominated by one particular theme. Can you imagine Seumas Milne and the gang devising their post-local-election strategy? Brainstorming, you might say. “Let’s go with Pendlegate! That should stop people whining about antisemitism.”

So we had John McDonnell and Barry Gardiner acting as if they had been gravely affronted, with a similar amount of outrage from Andrew Marr, Robert Peston, and Sarah Smith.

The offending tweet was too, too awful to describe, horribly racist, unrepeatable and pass the smelling salts, Mildred.  Not terrible enough to be redacted or permanently banished to room 101 though. You could see it in its full glory on Guido. 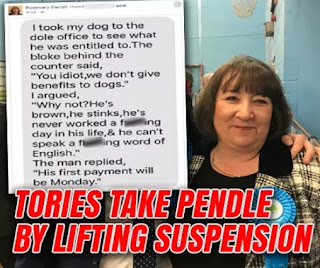 Several precious moments of air-time were devoted to the implications of this despicable tweet, which everyone found too obnoxious to describe but insisted that the nature of it totally discredits the Conservatives who are now (thankfully) just as toxic as Labour.

The level of this discourse typifies the superficiality we’re supposed to accept as journalistic scrutiny.

The racist joke is no longer just a racist joke. Now, according to the pundits, it represents the “views” of the lady who was dumb enough to tweet the joke rather than simply recounting it while pissed, in the pub. People come back from pubs with ten-a-penny jokes like that all the time, (so I hear) and despite being (or maybe because) they’re racist, they’re deemed worth repeating because they are funny, in an absurdist way.

The dog fits the supposed criteria for dole, and for that 'unarguable' reason, he’s given it. There you have a racist and absurdist joke. I'm not justifying the tweet, the joke or the lady, by the way. Just pointing out the way it has been, to use a fashionable term, 'weaponised'.

The undeniably racist element of the joke is that brown people, (impliedly immigrants) are workshy, unwilling to learn the language and smelly, and the perception is that “they” are unworthy of the hand-outs they’re supposedly being given, willy-nilly; the theme is society’s underlying resentment thereof.

However, the way the joke is constructed, the humour is principally absurdist, which is why it is amusing.

The antisemitism in Labour doesn’t even have the saving grace of being in the form of a joke. It’s straightforward, unadulterated Jew hate, and it’s not even mildly funny.
Posted by sue at 16:50