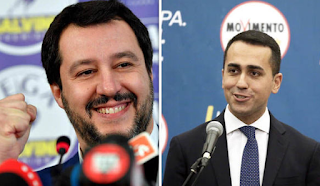 Being (for some reason) fascinated by the goings-on in Italy, tonight has - from what I've been reading - been quite something.

The pro-EU president has provoked a full-blown constitutional crisis by refusing to agree to the appointment of a Eurosceptic economy minister (Paolo Savona) chosen by the would-be, new, democratically-elected Five Star/Lega coalition government - and, fascinatingly, it's the (allegedly left-leaning) Five Star leader Luigi Di Maio rather than the (allegedly far-right) Lega leader who is is now leading the calls for mainstream centre-left President Sergio Mattarella to be impeached for refusing to appoint the Eurosceptic minister.

President Mattarella's move might prove disastrous (for the likes of him) by fuelling the far-from-ridiculous narrative that elites are looking for ways to circumvent democratic outcomes that they deem unacceptable. He says he vetoed Professor Savona's appointment because it was his "duty to protect the savings of Italians".

And how did the BBC report this extraordinary turn of events on their main evening TV bulletin tonight? Well, (briefly) like this:

Newsreader: The latest attempt to form a coalition government in Italy has failed. The man designated as the new Prime Minister, Giuseppe Conte, now says that he can't take up the role because the President won't approve his cabinet. Our correspondent James Reynolds is in Rome. So what happens now?
James Reynolds: The President may appoint a new, non-populist Prime Minister who may not last all that long. This is now a real clash between President and populists. It's about Italy's relationship with the European Union. The populists had wanted to appoint a finance minister who'd said in the past that Italy should prepare to leave the euro. The President vetoed this appointment. He essentially told the populists you cannot just sneak Italy out of the currency it helped to create. You'd need to have a proper national debate about it first. Perhaps the only solution right now would be early elections in which for the first time Italy's membership of the euro and its relationship with the EU may really be up for discussion.
Newsreader: Thank you.

I don't think that gave much of a sense of the drama of the situation and, unlike the reports I've been reading elsewhere, this BBC report here prioritised the pro-EU president's point of view - his claim, as paraphrased by the BBC's James Reynolds, about "sneaking Italy out of the currency it helped to create" - rather than that of "the populists". Why not quote Luigi Di Maio?
Posted by Craig at 00:28