The following video from BBC Teach, which the BBC says is "suitable for teaching 14-16s", discusses the hot topic of immigration...

...provoked a strong attack from Nigel Farage in the Daily Telegraph under the headline The BBC is poisoning our children's minds with pro-immigration claptrap.

Nigel has a point. The BBC Teach video begins:

Think immigration’s a recent thing? Think again. Because, you see, you’ve got the Celts, the Romans, the Anglo Saxons and the Vikings, the Normans, the Flemish, the Irish, black Britons and Jewish people. Yup, we were multicultural long before curry and carnival. It’s in our DNA. There’s no such thing as a pure Brit, despite what some flag wavers would have you believe. The average one is just 36 per cent Anglo Saxon. Migration did step up after the Second World War, when people arrived from all over the colonies. Places like India, the Caribbean, Pakistan, Uganda and Kenya. Then we joined the EU, which meant we could easily move to Paris, Rome, Berlin, Barcelona, and that people there could come here. Some people come fleeing war or poverty. Others, because we have a better music scene. But it’s only the past 20 years that have seen more people come and go. Even so, you can’t open a paper without some people giving it large about immigration.

Does the BBC really think that this video demonstrates its impartiality?

P.S. Why is the Jewish character Mr Bean with a comedy moustache? 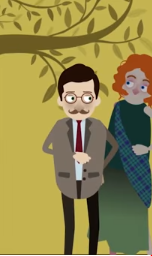