I just watched an extraordinary performance by Andrew Neil. First, he interrogated Stephen Crabb of CFOI. His questioning was repetitive, and his approach was impatient and unoriginal, namely that  Israel is guilty of ‘disproportionate use of force against unarmed civilians'. 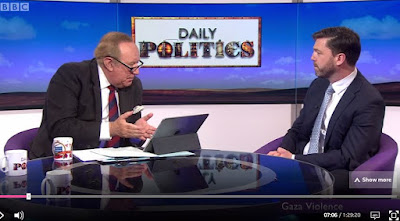 “Social unrest” he called the riots. “Sixty people shot dead, most of them unarmed” he repeated. “Why do it?”

It was perfectly obvious that he and the rest of the BBC can see no justification whatsoever for Israel’s actions. He kept saying, irritably, “so you refuse to condemn Israel” and constantly reinterpreted his interviewee’s words, rather like a combo of Cathy Newman and Evan Davis, who wanted to extract an emotional outpouring of regret from his Israeli interviewee on last night's Newsnight.

Neil seemed to think it was a simple matter of bringing in a few “anti-riot police” - not soldiers armed with high-velocity weapons. Did he know the numbers involved? How many anti-riot police would be enough to quell 40,000 ‘protestors’? We’ll never know. “Why do it?” he kept asking, then  “How many Israelis were injured?” he ventured, turning into a ghoulish Mishal Husain. How many injured Israelis would suit you? one would like to know.

What are things coming to, I wondered - when the BBC’s only supposed ‘good guy’ is brimming with ill-will towards Israel?

Next, he turned to Richard Burgon, the shadow something or other, (Secretary of State for Justice and Shadow Lord Chancellor) and suddenly it transpired that Andrew Neil knew all along that many of the unarmed civilians were not unarmed at all.   He wondered what would have happened if the protesters had got through the fence? "But they didn't," said Burgon. (No, because they were shot.)

“It all happened because Hamas organised it,” said Neil, and it was Burgon’s turn to be dismissed with: “so you refuse to condemn Hamas?”

I have to say this was not Andrew Neil’s finest hour. He was impatient and rude and at times he wouldn’t let his victims complete a sentence because he thought they were not answering his unanswerable questions. He showed no attempt to think beyond the superficial and appeared to be pandering to the kind of viewer who is as ignorant of the reality on the ground as the entire coterie of journalists and reporters currently employed by the most trusted news-gathering outfit in the world. They have all, collectively, leapt to the same conclusion- reflexive condemnation of Israel.

Everyone is willing to rush in with their disapproval, most of them showing no curiosity and little understanding of the situation. It reminds me of the Goldstone report. Remember that?

I'd say, don't rush in, just because you can. This is one time when it really is wise to wait for a formal inquiry before dishing out blame. I’d be interested in Andrew Neil’s response to this letter from a soldier in the IDF who witnessed the proceedings, published on the Elder of Ziyon website.   I reproduce some of it below.

"I’m writing because I am one of the few who was there – in uniform, in the reserves, but I was there. Yes, right there on the fence where the demonstrations are happening. It was last Friday – but I saw it with my own eyes; I was on our side but I could see and hear and understand everything. I want to testify from my firsthand knowledge, not a theoretical point of view. Because I was there.

I want to testify that what I saw and heard was a tremendous, supreme effort from our side, to prevent in every possible way Palestinian deaths and injuries.

Of course, the primary mission was to prevent hundreds of thousands of Gazans from infiltrating into our territory. That kind of invasion would be perilous, mortally dangerous to the nearby communities, would permit terrorists disguised as civilians to enter our kibbutzim and moshavim, and would leave us with no choice but to target every single infiltrator.

That’s why our soldiers were directed to prevent infiltration – in a variety of ways, only using live ammunition as a last resort. The IDF employs many creative means of reducing friction with Gazans and uses numerous methods, most of which are not made public, to prevent them from reaching the fence.

In addition, over the last few weeks there have been serious efforts to save the lives of children and civilians who have been pushed to the front lines by the Hamas – who are trying to hide behind them in order to infiltrate and attack Israel.

When there is no alternative and live ammunition must be used to stop those who storm the fence – the soldiers make heroic and sometimes dangerous efforts not to kill and only to injure those on the other side.

The IDF is stationing senior commanders at every confrontation point to ensure that every shot is approved and backed up by a responsible figure with proper authority. Every staging area has an especially large number of troops in order to make sure that soldiers are not put into life-threatening situations where they will have no choice but to fire indiscriminately.

A situation where thousands of people rush you is frightening, even terrifying. It is extremely difficult to show restraint, and it requires calm, mature professionalism.

55 dead is an enormous number. But I can testify from my first-hand experience, that every bullet and every hit is carefully reported, documented and investigated, in Excel spreadsheets. Literally. I was there and I saw it with my own eyes.

This isn’t the time or place to discuss the situation in general and the desperate plight of the residents of Gaza. I’m not interested in starting a political discussion here, although I do have a clear position.

What I’m trying to do is present, for everyone who really wants to listen, the extent of the IDF’s enormous effort to protect Israel’s borders while minimizing injuries and loss of life on the other side.

And despite all this – the situation on the border with Gaza is deteriorating. I hope that we won’t be called up again soon for reserve duty to protect our country. But if we are, we will go with the knowledge that we are serving a just and morally correct cause. We do not rejoice when we must go to war, but we also don’t go like sheep to the slaughter. Not anymore.

So there you are. Why do it? you ask. Now you know at least part of the answer.

Update:
It would be quite nice if Andrew Neil and some of the least intransigent armchair moralisers would acknowledge that Hamas claims 50 of 62 Gaza border deaths were its own members.


Salah al-Bardawil, one of the Islamist group’s leaders, told Palestinian Radio on Wednesday: “In the last round of confrontations 62 people were martyred, 50 of them were Hamas.”

In a further statement, the Islamic Jihad terror group said three of its members were also killed in the protests.