I receive frequent messages from CUFI, which I assume is because Google tracks my search habits. In case you aren’t familiar with that acronym, it stands for Christians United For Israel. Funny thing is, I assumed (too much assuming?) that Christians were basically rather opposed to Israel.

* Think Lucy Winkett Rector of St James's Church, Piccadilly, she of the Christmas “Tear down that Wall” stunt, “Bethlehem Unwrapped”.

* Think - TFTD regular, John Bell of the Iona community who, only the other day, reflected somewhat critically upon prejudice and bigotry, somehow overlooking his own antisemitism.

* Then, of course, there’s Stephen Sizer. The less said about this person the better.

* I understood the Methodists aren’t exactly sympathetic to Israel.

* Not to mention the whole Catholic “The Jews Killed Christ” shtick, which haunted many a Jew of the past generation, that is, before one of the modernising Popes imperiously announced he’d forgiven them.

It is being said that President Trump’s decision to move the US Embassy to Jerusalem was influenced by pressure from the Evangelist lobby, his biggest supporters. They’re Christians; Christian Zionists who believe that a thriving Israel will hasten or have a positive effect on the ‘second coming’ or some such.

But CUFI is a British organisation, and I don’t imagine they have very much to do with Trump’s folk. An assumption, I know.

Anyway, CUFI’s latest message is well worth a look, even if only to counter the relentless anti-Israel rhetoric, which is all we’re getting from the mainstream media.

I see the BBC has started telling viewers about the “Nakba”. They say the Nakba is:

“What the Palestinians see as their catastrophe when many hundreds of thousands fled or were driven out of their homes when Israel declared independence in 1948.”

Don’t mention the war! I know people who actually believe that as soon as ‘Palestine’ was given to the Jews (moreover, given to them by the British who had no right to do so) hundreds of thousands of Arabs were forced from their homes at gunpoint by Jewish terrorists. Many people do not know that the Arabs instigated a war against Israel as soon as it became independent in 1948, assuming (wrongly) that they could achieve a swift and devastating wipe-out, eradicating the devilish Jewish interlopers.

However, on the BBC website, where they have a habit of ‘explaining’ the Background According to the BBC,  they have mentioned the war. In the paragraph headed The story in 100 words, they say:

“On 14 May 1948, Israel declared independence, and in a war which began the next day, up to 750,000 Palestinians who had lived on that land fled or were expelled from their homes.”

Don’t you just admire the way they put it? “in a war which began the next day” You know, the kind of war that just happens for no apparent reason, like a kind of spontaneous combustion.

That’s the pro-Palestinian version of events, which absolves the Arab leadership from its part in the expulsions, not to mention their disgraceful exploitation of the refugees that followed. Jeremy Bowen is at pains to inform viewers that this dispute “is about land”.
No, you apologist for antisemitism. It’s about religion and it’s fuelled by Islamic supremacy and hatred of Jews. 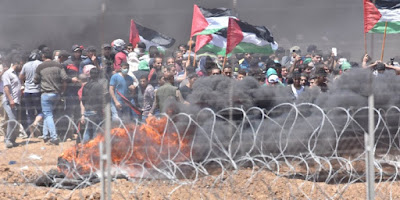 Biased media  Sadly, and unsurprisingly, the mainstream channels in the UK have been demonising Israel with their biased reporting.

Sky News, for example, decided to run this shocking headline on its homepage yesterday afternoon: “LIVE: Deaths as US embassy opens in Jerusalem”, deliberately intending on associating the fatalities to the US embassy move.

This is clearly an attempt to paint the US decision as a problem rather than a solution. They are not the only ones, other media outlets are condemning Israel whilst looking away from the real crimes of Hamas.

Israel’s Ambassador to the UK, Mark Regev, has been defending his country on the airwaves.

Swastikas and Auschwitz-style striped jackets to taunt the Jewish soldiers. Hamas and their henchmen in Gaza have achieved the high body count they wanted. pic.twitter.com/VsiyInocTM
— Rɪᴄʜᴀʀᴅ Kᴇᴍᴘ (@COLRICHARDKEMP) May 15, 2018