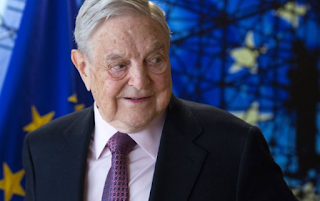 The BBC has a new profile today of the famous George Soros - the man who (Putin-style?) is interfering in the British Brexit debate by pouring some of his billions into a new 'second referendum' anti-Brexit campaign group dedicating to overturning the referendum result and stopping Brexit.

Let's look at how the BBC frames its profile of him by quoting the profile's first four paragraphs.

And, were this an old-fashioned English exam paper question, the question here might be phrased:

Do you detect any bias on the reporter's part here? If so, in what direction and how is that bias communicated? (3 marks)


Hungarian-American businessman George Soros is one of the world's most renowned, and philanthropic, financial investors.

Earning his fortune through shrewd financial speculation, he has spent billions of his own money funding human rights projects and liberal democratic ventures around the world.

In recent years, that funding has made him a target of the world's nationalists and populists, who have painted him as a master-manipulator of democracy.

Much of the criticism aimed toward the 87-year-old has been criticised as having anti-Semitic undertones.

Well, I'd say that the first paragraph is favourable to Mr. Soros. It uses positive language ("renowned", "philanthropic") about Mr. Soros and includes no balancing negative terms.

The second paragraph, which could have been unfavourable to him by reminding British and Northern Irish readers of his role in attacking the UK's currency in the early 1990s (to his own advantage), merely uses the positive phrase "earning his fortune through shrewd financial speculation" - the word "shrewd" making all the difference there - and then continues the flow of positive language with words emphasising his "philanthropy".

In the third paragraph, we get a description of his enemies ' - "the world's nationalist and populists" - and those rascals "have painted him as a master-manipulator of democracy". (Note the loaded language there: "painted him", "master-manipulator". It can be inferred from that that the reporter doesn't accept that characterisation of Mr. Soros).

And, following straight on from that, comes 'the killer paragraph' about how "much of the criticism" of  the poor, frail, elderly 87-year-old person, "has been criticised" - N.B. BBC 'degrees of separation', 'some say...' etc, in action here) "as having anti-Semitic undertones"...

...thus, 'logically', connecting the criticisms from "the world's nationalist and populists" with those unnamed people responsible for the "anti-Semitic undertones" - i.e. implying via 'much' that most of George Soros's critics are antisemitic.

As MB notes on the earlier open thread:

Now, I've been disgusted for ages about the tone of some of the criticism of George Soros I've read, which most certainly has been antisemitic (or verged very heavily towards it), but most of what I've read (especially from here in the UK) hasn't been in any way antisemitic, simply sharply critical.

Why shouldn't people criticise him for that?

The context of this article is Mr. Soros launching 'Best for Britain'. It's a deeply 'divisive' intervention from Mr/ Soros, and of course it's bound to draw heavy criticism.

For the BBC to publish a profile of him, specifically published to mark that launch, and for it to begin in such a biased (sympathetic) fashion is surely yet another clear cut piece of evidence to be added to the case against the BBC's claims of impartiality.

If the BBC reporter who wrote this piece didn't vote 'Remain' in the EU referendum I'll eat every hat Lord Ashdown owns.
Posted by Craig at 19:13