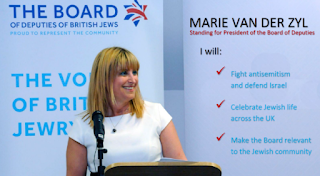 Listening to this morning's Sunday, can you guess which angle Radio 4 chose to take when interviewing the new President of the Board of Deputies of British Jews, Marie van der Zyl? Yes, the feminist angle. (She's a woman!). Couldn't more be done?

And when the Royal Wedding preacher Bishop Michael Curry was interviewed, some of the questions put to him were from the anti-colonialist angle (linking the British Establishment to slavery, etc).

And, yes, the Champions League final between Liverpool and Real Madrid really was discussed from the angle of how Liverpool supporters are embracing the Islamic faith of Mohamed Salah - with both BBC presenter and BBC reporter openly rejoicing on the positive consequences for social cohesion. (They played us the chants of Liverpool supporters saying they'll pray in mosques too, as if it's good enough for Mo Salah it's good enough for them.) I'm not exaggerating about the enthusiasm expressed by the two BBC people here - as you'll hear for yourself if you listen to the programme.

And, though the closing discussion about the Irish abortion referendum was balanced, guest-wise, the opening segment on the same subject was a procession of rejoicing Irish people from the pro-choice side. I lost count. I'm guessing though that we heard from around 15 celebrating pro-choice supporters in a row. Cheers and all.

The life of the most prolific Thought For The Day speaker on Radio 4, ex-BBC, Labour peer and former Methodist leader Leslie Griffiths (who passed away this week) was reviewed by friends and admirers.

And Quilliam (quill.i.am?) Foundation co-founder (with Maajid Nawaz) Ed Husain was interviewed about his new book The House of Islam: A Global History. Ed argues that history shows that Islam is wholly compatible with the UK, but that UK Muslims must get out of their comfort zone, take a stand and vigorously reject Salafis and Wahhabis as not being real Muslims. Sunday challenged him on that latter point. 'Isn't such a call unfair to UK Muslims?' was the Muslim grievance-card angle pursued.

And even the piece on a project recreating sailing journeys from our Celtic past - which I liked the sound of - featured a section on Morecambe Bay (the UK's finest bay, according to Donald Trump, Kim Jong-un and Jon Sopel) where refugees and asylum seekers were thought about in concerned tones, and the project's worthiness projected to Radio 4 listeners.

It was BBC worthiness overkill.

And, like a masochist, I sat through it from start to finish (to serve you, dear reader!)
Posted by Craig at 17:45