In which Mark Mardell goes after the anti-EU press 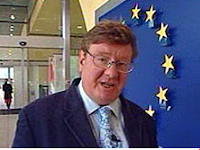 If you're a regular listener to The World at One you will know that Mark Mardell has a thing about Brexit. He loves it - every twist and turn of the process, warts and all.
Sarah Montague, The World at One, 24 May 2018

The latest edition of Mark Mardell's Radio 4 series Brexit: A Love Story? was remarkably biased, even by the standards of Radio 4.

It looked at the influence of the press on public attitudes to the EU and only focused on the right-wing press that published critical stories about the EU: The Sun, The Daily Telegraph and The Daily Mail.  (It didn't consider the role of pro-EU newspapers like the FT or The Guardian.)

It featured four pro-EU 'talking heads':
and only one Leave supporter:

And who was 'in the dock'? Paul Dacre, Rupert Murdoch and, above all, Boris Johnson.

It's quite extraordinary that no alarm bells rang at Radio 4 over its long section on Boris Johnson. To have all four pro-EU 'talking heads' criticising him or (at best) damning him with faint praise and to have no supportive voice defending him is surely indefensible. In fact, the whole thing came across as a sly hatchet job.

And what sort of 'balance' did Kelvin MacKenzie provide? Well none really, given that KM exuberantly painted a picture of his former newspaper The Sun which portrayed its EU coverage as playing it for laughs - i.e. of consisting of "fun" stories which played fast-and-loose with the facts in the interests of entertaining Sun readers. Mark Mardell himself could hardly have scripted more 'helpful' remarks.

This was all appallingly biased. Twitter was ablaze with enthusiastic comments from pro-EU listeners recommending it to each other. If Radio 4 can't see that then there's something very wrong with their bias filters.

I'm assuming a later episode of Brexit: A Love Story? won't be considering the BBC's role in advancing the EU's cause over the past few decades. If such a programme was ever made and a similar approach to balance was taken but in the opposite direction (yes, I know we're entering the realms of fantasy here) then the equivalent 'talking heads' to achieve the same level of bias in the other direction might be, say, having John Redwood instead of Ken Clarke, Peter Oborne instead of Sir Max Hastings, and Michael Gove and Sarah Vine in place of Jeff Meade and Jacki Davis. Imagine the uproar! (It will never happen so imagining it is all we'll ever be able to do). Who would be that imaginary report's Kelvin MacKenzie though? One things clear though: It certainly couldn't have Mark Mardell as its presenter.
Posted by Craig at 10:50