"Conservatives should probably stop congratulating themselves" 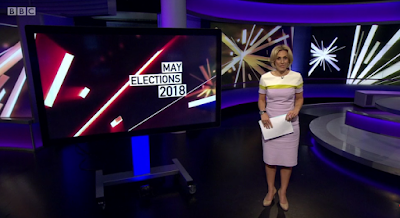 Emily Maitlis's framing of the local election results on last night's Newsnight was striking. Please see what you make of it:

Good evening. Expectation management is an ingenious thing. Were Conservatives really worried Labour was going to paint London red? Did Labour themselves really think it possible? In the end it didn't happen, and Labour failed to make the breakthrough it had been hoping for; now the blame game about who really started the rumour it ever would. Certainly Labour did gain ground in the capital, just not enough to create big headlines. They also lost control of Derby and Nuneaton and Bedworth but gained Plymouth. Conservatives should probably stop congratulating themselves on holding onto their bastions of blue - Kensington, Wandsworth and Westminster. They lost Trafford in the North West but did pick up Barnet - the anti-antisemitism vote. Arguably the night was won by the Lib Dems and also by the Greens who had their best local result in history. And it was definitely lost by UKIP. Their voters, let's just say, went back to where they came from in terms of party allegiance. Tonight we aim to battle through the weeds and work out who is genuinely up and who is down. The projected national share, which extrapolates from local into a national picture, shows the two main parties on 35% - Labour marginally ahead there. So perhaps the fairest picture is of a country in stasis. 'No overall control' seems the most fitting description for Britain itself.

The two things that particularly stood out for me there were:

Conservatives should probably stop congratulating themselves on holding onto their bastions of blue - Kensington, Wandsworth and Westminster.

(Is that really for a BBC presenter to say?)

The projected national share, which extrapolates from local into a national picture, shows the two main parties on 35% - Labour marginally ahead there. 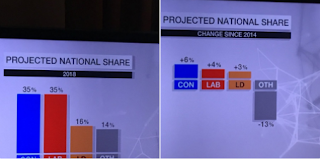 Am I missing something? How can Labour be said to be "marginally ahead" on the projected national share if they are shown as neck and neck on 35% with the Conservatives?

Is this proof that it's not just politicians who spin election results?
Posted by Craig at 15:57