I awoke to the business section of the Today Programme, which goes out before 7am.  For reasons known only to the BBC, they had decided to mark the upcoming Nakba day / Trump’s new US Embassy by despatching Martha Kearney to Jerusalem, and much of the programme came from Israel. Justin was back in London.

The first Israel-themed interview was with Doron Kolton of TopSpin Security, a thriving Israeli cyber security company. The mood was upbeat and ‘can-do’.
“The attitude here is - we have a problem, ok we will find a way to solve it,” said Mr. Kolton enthusiastically.
For one moment I thought some sort of turning point had occurred. A sea-change - but I was mistaken. The positivity didn’t last long.  In fact, that was it. After that interview normal service was resumed.

Still with business, we were treated to the travails of doing business from the “territories”.
”The occupied territories have a much tougher time because of the restrictions, you know," announced the presenter. “There are lots of little restrictions that you wouldn’t know about,” said he.
Well, we will in a minute, I thought.

“Did you hear Manal White, the MD of Zaytoun, talking about the restrictions that business and farmers face in Palestine on the Today programme. Listen again on BBC iplayer. Manal's interview starts at about 6.18am. https://www.bbc.co.uk/radio/player?”

...says a highlighted Tweet on the Zaytun website. Yes, we did hear it, and it sent a passive-aggressive message while advertising its produce.

If I were Craig, which I ain’t, I’d do a clinical analysis of the ‘for and against’ voices that appeared on this programme, time them, and deconstruct Martha Kearny’s questions and reactions. Unfortunately, I haven’t the patience, so suffice it to say that there were many more ‘againsts’ than pros. And, predictably,  some of the ‘againsts’ were left-wing Israelis.

I didn’t spot any pro-Israel voices from the Palestinian side, nor any self-critical ones. The nearest thing to a conciliatory remark came from a Palestinian woman who thoughtfully posited that there might be some nice Israeli people. That is, after explaining why she takes her children along to the Gaza ‘protests’. "Because to get what we want there must be Blood”.

The BBC voices could also, arguably, be counted as: “against". (Yolande Knell, Barbara Plett-Usher, Tom Bateman as mournful as ever, Jeremy Bowen and the author of a book about Gaza, Donald MacIntyre.) Yolande (Rhymes with Roland) Knell gave us a brief history lesson about the hundreds of thousands of Palestinians “who fled or were driven out of their homes in the ’48 Arab Israel war.”  Still, that’s not as loaded a version as Lyndsey Hilsum's, who just articulated something very similar on Channel four, only she said “a million”, adding that many were ”massacred”.

Is it surprising that there’s so much Jew-hate around when these fanciful stories are bandied about?

Having written the above, I’ve just seen this summary from the eyes and ears of Israel-related broadcasting, Happy Goldfish. (I don’t know what he’s got to be so happy about) Here you can see the names set out so that you can have a guess who said what. 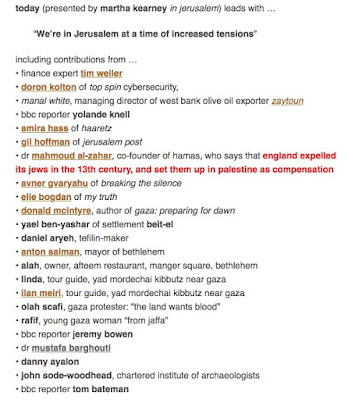 The most disturbing interview occurred when Martha went to Gaza to talk to Dr Mahmoud al-Zahar, co-founder of Hamas.
He made no bones about the fact that the violence in the current March of Return protests is deliberate and he made it clear that the 'peaceful' protests are no such thing. He was so open about his abject loathing of the Jews. that it was almost refreshing to hear it. I predict that most listeners will let it wash over them, perhaps wishfully persuading themselves that the nice old man doesn’t really mean it.
He had a particularly colourful way of enunciating the word “Jews”, with the kind of spittle-flecked relish that only deeply-held, visceral hatred can evince.
This bit was truly vile:

“In 1220 Britain eliminated the existence of Jews, so if you are speaking about discrimination…. You are getting rid of the Jews - from your country and you established this state as a replacement, You put your enemy in our land as a sort of occupation, and to immunise your country against the corruption of the Jews.”

Martha said, a little sharply, “That's antisemitic!”  Martha should have been around to say that to Adolph Hitler. “You should be ashamed of yourself, you racist”, she’d say, and then the Holocaust would never have happened.
(That’s sarcasm by the way.)

"We are not happy about any sacrifices... but nobody can prevent them" - one of the co-founders of Hamas, Dr Mahmoud Al Zahar, tells us Palestinians will keep trying to cross the border into Israel - even if that means being shot. #r4today pic.twitter.com/xk6WajZ7eN
— BBC Radio 4 Today (@BBCr4today) May 11, 2018