The BBC News website currently has a UK political protest as one of its lead stories: 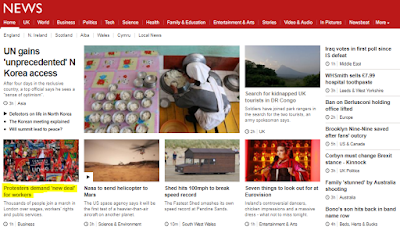 What protests, marches and demonstrations the BBC chooses to cover is a hot issue these days. Those whose protests don't get reported can become very angry at the BBC, and the BBC is facing more and more accusations of 'BBC bias' as a result - especially when other much (like this one) are given ample coverage?

Back in March the BBC's almost non-existent coverage of a day of anti-Brexit marches provoked a social media storm (starring Lord Adonis).

So why is the BBC giving this TUC-led rallies of "thousands" such prominence having given those either next to no coverage or no coverage whatsoever?

Well, here's a transcript I prepared earlier (but didn't post) from the 30 March edition of Radio 4's Feedback in which the BBC's UK News Editor Richard Burgess lays out five criteria for assessing whether (or not) the BBC will cover a protest:
Obviously some protests do meet those criteria.

The 'Enough is Enough' protest by Jewish groups and various parliamentarians in late March is one example: Antisemitism in the Labour Party was a live issue, and a developing issue; the march could have brought about significant change; it was influenced by very recent events; and there most definitely was a real developing new story around that protest.

Others, however, don't meet those criteria. 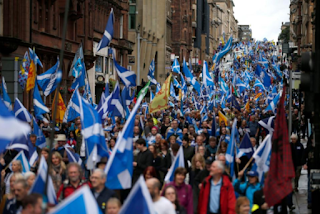 Here are a few examples of the complaints made against the BBC over the Glasgow independence rally:
By 'Richard Burgess of the BBC's criteria', however, this demonstration in favour of Scottish independence merited getting pretty much ignored by the BBC because Scottish independence isn't a live issue, or a developing issue, at least in the sense of being hotly (or even tepidly) topical at the moment, and the demonstration couldn't have brought about significant change. Nor was it was influenced by very recent events, and there most definitely wasn't a real developing new story around that protest.

And I can well imagine Richard Burgess saying exactly the same of that 4K-strong Day of Freedom rally in London too.

Yes, the March for Independence that weekend undoubtedly mattered deeply to those who took part (and those who strongly supported it) but passion and how important supporters of a demonstration think their demonstration is aren't parts of the BBC's criteria here.

So here's the question: There are marches, protests and demonstrations happening all the time in the UK (anti-austerity protests, anti-Brexit protests, anti-capitalist protests, pro-NHS rallies, anti-(Western-led)-war protests, anti-Israel protests, etc, etc, etc). Which ones should the BBC report?

I have to say that I think Richard Burgess's criteria for reporting marches, protests and rallies are entirely sensible-sounding to me. If it means, therefore, that the Day of Freedom rally, the March for Independence in Glasgow and all of those endless anti-Brexit protests get buried by the BBC then so be it. 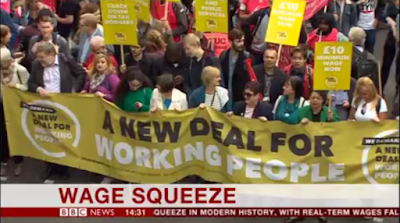 But does this TUC-led protest meet the Richard Burgess criteria? Is it a live issue? Is is a developing issue? Is the march likely to bring about significant change? Has it been influenced by very recent events? Is there a real developing new story around this march?

Well, I'll let you decide that, and move on to the (belated) transcription instead.


Roger Bolton: Hello. Did this demo actually take place? Thousands of anti-Brexit protesters staged demonstrations across the UK last weekend but if you weren't there would you know about them. Some Feedback business say there was precious little BBC coverage of the marches and they smell a rat. But first, if you want to influence the public debate get walking! The March for Our Lives in Washington - an estimated half a million people descended on the US capital calling for stricter gun control. The march dominated much of last Saturday's BBC News output. You could not miss it. But there were other marches going on of which you may well be unaware, unless you're glued to social media. Thousands were also demonstrating in the UK in a series of anti-Brexit marches in Leeds, Edinburgh and Pontypridd, among other places, and a flood of people emailed Feedback to express their suspicion that a deliberate blackout of anti-Brexit protests had been imposed.

My name is Lloyd Dawes and I am from West Molesey in Surrey. The BBC appears to have in place a news blackout on anti-Brexit marches. The BBC covered the anti-gun protests in the United States and Nigel Farage throwing some fish into the Thames but there was barely a dickie bird on the many thousands who took to the streets across the United Kingdom on Saturday to campaign for continued EU membership and a referendum on the final deal. How many thousands of Brexit demonstrators are required for the BBC to consider it newsworthy?

My name's Charlotte Smith. I'm from Britain but living in France. I was pretty disgusted because they almost didn't handle it at all. There were a number of marches last Saturday, and particularly in Leeds there was a very large march reported to the 8-10,000 people. The BBC reported it as "several hundred". Clearly the BBC are not reporting the strength of feeling for Remain in the UK.

My name is Paul Unwin and I'm from London. I saw no reflection of the marches on the BBC. Setting that in comparison to Mr. Farage, whose performance chucking fish off a boat in the Thames, which seemed to get a lot of  coverage, I felt that the BBC was failing in its duty of balance.

Some strongly held views, not only about the lack of coverage of those anti-Brexit marches but also about the BBC's overall treatment of Brexit - concerns that I put to Richard Burgess, the BBC's UK News Editor. I began by asking how substantial had been the national coverage of those marches.

Richard Burgess: Well, we covered them on the website. The local news Look North also covered them. I think it was their second story. But I do think we need to continually look at this issue and make sure that we are alive to these marches that are happening, whether in they are in London or outside of London, monitor them, and then try and make an assessment based on a number of different factors over what level of coverage they can get. It's worth remembering...

Roger Bolton: (interrupting) What assessment was it then you made that these were not worth reporting on the national news?

Richard Burgess: Well, I don't think the figures of people there were enormous. They were in the hundreds or thousands, They're always quite difficult to absolutely assess how many. When we're making an assessment on whether we will cover a protest like this it's influenced by a number of factors: How much of a live issue is it? How much of a developing issue is it? Is this march likely to bring about significant change? Has it been influenced by very recent events? Is there a real developing new story around this march? I mean, we have reflected Brexit and the various opinions around Brexit, pro and anti, significantly within our output and we are continuing to do that and we're doing it this week obviously with the One Year to the Exit. So... 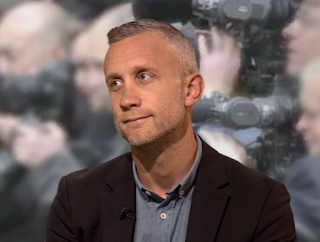 Roger Bolton: (interrupting) Well, you see, you're challenged by a number of our listeners. One, Charlotte Swift, clearly think you underestimated the numbers. She said there were thousands. Where did you get your figures of hundreds from? Where do you get your figures from?

Richard Burgess: So, I think you get them from a variety of sources. They are quite difficult. I don't think anyone knows exactly how many people are on these marches. So they can be from the police. They can come from the organisers. We had a reporter on the ground there as well in Leeds who contributed to our understanding. But can we say exactly how many people are on any one march? I don't think you can. Inevitably, people are making estimates based on their level of understanding.

Roger Bolton: So when listener Lloyd Dawes asks 'How many thousands of demonstrators are required for the BBC to consider such an event newsworthy (regardless of the cause they're demonstrating for)?', do you have a figure?

Roger Bolton: Well, let's look at that agenda. You covered, gave very considerable coverage over that weekend, to the gun-control marches in the United States - obviously important but, as some listeners have pointed out, not of direct relevance to the UK whereas Brexit undoubtedly is.

Richard Burgess: Well, specifically on the US marches. I do think that is exactly what I'm talking about: a developing story, an extraordinary march of hundreds of thousands of young people, emotional speeches, after a significant event recently (the Parkland High School shooting), and the potential of a change in the way America views their gun laws, so...

Roger Bolton: (interrupting) But does that compare with our own future, the biggest change for fifty years, people demonstrating passionately about their belief this is the greatest foreign policy mistaken in fifty years, and you don't give it the prominence you give to what we assume is demonstrations which will marginally affect whether America will have gun laws or not.

Richard Burgess: So, two things: We definitely have given expression to those views around Brexit and the EU marches. And I think again, I think what I want to say is I do think this is something that we do need to look at, we need to be alive to think, and I think we...I want it to be on our agenda to assess...

Roger Bolton: (interrupting) But hasn't it always been on your agenda? This is what people find strange. You don't...Are you hinting that actually, altthough you won't say it, you made a mistake in this case, you should have covered...

Richard Burgess: (interrupting) No, no, no, I will tell you...

Roger Bolton: ...I will look at it again...No you didn't? You are adamant?

Roger Bolton: Finally, let me deal with the question of bias. Some would say, in the first instance, you just made the wrong decision, that's OK, that sometimes happens, but some think actually you made this decision because you're biased. They would say, look, you covered Nigel Farage and a handful of people throwing dead fish into the Thames last week - a clear stunt - and you didn't cover these marches. Pro-Brexit bias.

Richard Burgess: We didn't cover the Nigel Farage thing that much by the way. It wasn't on the 6 or 10 C'clock News. I mean, we might have done a little bit of marginal coverage. I think that actually does reinforce what I was saying. There's a specific issue that has developed since the transition deal was agreed around the Common Fisheries Policy. It did give us an opportunity to get into that issue, which is of quite a lot of concern to, in particular, Scottish Conservative MPs.

Roger Bolton: But the final thing, I suppose, is that people would said that you are so aware of how divisive this issue is that the BBC simply wants to get through the next 12 months unscathed.

Richard Burgess: I don't think that you could claim that we're stepping back from covering Brexit. You know, you just look at the amount of coverage we have given to that topic this week, with one year to go until the official kind-of leave. I think what we want to do is to try and explain the different viewpoints but also how it's going to influence life across the UK. So it isn't just about reporting marches and protests; it's about trying to explain Brexit, and what's happening, and what the implications will be.