Looking on the Dark Side 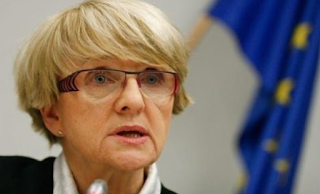 Today's The World This Weekend,...

She was predictably negative about Brexit and the consequences for the UK of leaving the Customs Union.

During the interview Ms Hübner said that non-tariff barriers "are not existing within the Customs Union".

Well, apparently that's not true. According to Full Fact:

There are no tariff barriers to trade with other members of the single market, but there are non-tariff barriers. These can be things like product standards and regulations that make trade harder.

This sort of barrier is a particular issue in the services sector.

Why didn't Mark Mardell pick her up on that?

Anyhow, if Ms Hübner was downbeat about our prospects if we leave the EU Customs Union then the BBC's John Pienaar, who preceded her, sounded even gloomier!:

That leaves aside the question that these trade deals that are being discussed. They're not there yet. Many people are deeply sceptical about the fact that they might be, that the European trade deal would take years to negotiate, that other parts of the world global economy - you look at America, you look at South Korea, China again -you're talking about years before they come on stream. So gaps and holes and barriers absolutely all over the place.

Can anyone think of a reason why that isn't biased reporting?


A burst of Eric Idle singing 'Always Look on the Bright Side of Life' is probably needed now.
Posted by Craig at 16:45