I know Sunday is usually the day for an Andrew Marr Show ft Rob Burley post here at ITBB, but BBC Executive Editor Rob has (quite rightly) been exercising his prerogative to ignore the usual mass seething of left-wing BBC critics who attend each and every edition of his former baby.

He chose (on Twitter) to criticise Gary Neville instead.

Big mistake. His Twitter timeline is now full of furious Gary Neville fans fulminating against him.

Maybe R Rob should stick to beating up Corbynista haters of Andrew Marr. He's very good at that. And it would probably be far, far less stressful that beating off those massed ranks of angry Nevillistas (who, from the looks of it, make the Neville family of the War of the Roses look like Countryfile-watching, sherry-sipping wallflowers).

(Note to self: Never post a piece here at ITBB that's rude about Gary Neville. We think Gary Neville's great and don't mind him being a miserable git one bit. In fact we applaud him without reservation for being such a miserable git.

Second note to self: Remind Sue of that when she gets back off her well-earned holiday).

As a blogger about BBC bias I do find the weekly Twitter tumult about The Andrew Marr Show fascinating (as you probably know). It's like looking in an inverted mirror from ten years ago and seeing the Left now reflecting back, with uncanny precision, the language and style and way of conspiratorial thinking of the Right back then, even down to the rude puns on political opponents' names and the particularly personal jibes against females (especially journalists) of the opposite political persuasion. Astonishingly (and I really didn't see this coming) a surprising number of these left-wing anti-BBC types are now starting to call for the scrapping of the licence fee.

(I assume, maybe wrongly given that I can't fathom out quite what they want and suspect they can't either, that they want a wholly tax-funded state broadcaster run by a Corbyn government that will ensure the right kind of BBC impartiality).

The bulk of what I saw today can be summarised thusly:

(1) Left-wingers (in their many hundreds) raging that Jacob Reece-Posh - a hateful far-right Tory backbencher from the pages of The Beano - was invited on. The BBC are bigging him up, like they bigged up Boris and Nigel Farage. The BBC are not just Tory they're far-right, and pro-Brexit. They invited JRM on to promote their right-wing, pro-Brexit agenda. Etc.

(2) Left-wingers (in their many hundreds) ranting about Isabel Oakshit being on the paper review. She's a vile, ugly, right-wing woman who was dressed in scruffy tracksuit bottoms/pyjamas. The BBC's obsessed with her. She's never off the BBC. She's nasty. Her and Jacob Reece-Posh -  it's all too much! Pro-Brexit, right-wing BBC bias. Etc. 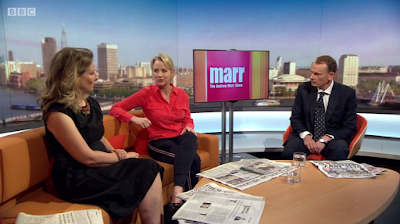 I'm not exaggerating there. I saw more than a few tweets about Isabel Oakeshott being vile and ugly from morally superior people who, often in the same tweet, themselves posted vile and ugly comments about her being vile and ugly. And the number of people 'punning' on her surname and replacing '-shott' with '-shit' was quite astonishing. (They might say 'great minds think alike' of course!).

And, of course, lots of left-wing people were stridently complaining that Jacob Rees-Mogg and even Damian Hinds got a lot less challenges and interruptions from Andrew Marr than Labour's nice Jonathan Ashworth. I suppose I should do my old thing and count the interruptions but I'm pretty certain the Ashworth & Hinds interviews were roughly as tough as each other. The JRM interview was, I think, a bit tamer - perhaps because, as those moaning Corbynistas were the first to say today, JRM isn't a frontline politician. Unlike Mr. Hinds and Mr. Ashworth, he's a backbencher.

And no, O Corbynista hordes, Andrew Marr wasn't saying that Jacob will be the next PM. He was saying that the bookies make him their favourite. And, despite what you first thought, that's not really the same thing, is it?

(I probably shouldn't have asked that question. A few Corbynistas on Twitter think this blog's posts about The Andrew Marr Show show us to be a pro-BBC blog that will defend the BBC at all costs.)

Nice to see Andrew Marr back and looking well though. He's no Emma Barnett of course. Only Emma Barnett is. Or Andrew Neil.
Posted by Craig at 17:32