History in the making, despite the BBC 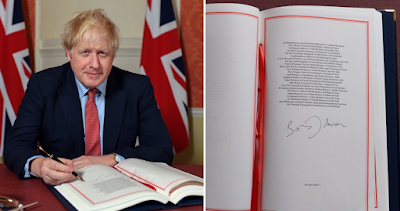 History in the making, despite the BBC.

As noted earlier today, BBC One's main news bulletins yesterday evening chose not to report this - extraordinarily, almost as if it were a case of sour grapes on the BBC's part.

Today, the European Union formally signed the Withdrawal Agreement. Ursula von der Leyen and Charles Michel, the leaders of the European Commission and Council respectively, with the EU's chief negotiator Michel Barnier poised behind them, put pen to paper this lunchtime.

John and Arthur T on an earlier thread noted that the BBC's News at One gave made it a blink-and-you'll-miss-it minor story towards the end of the bulletin.

John timed it and found that the BBC gave it 19 seconds. I've checked it out myself and re-timed it (as I like to be thorough) and, yes, John was spot on: it was exactly 19 seconds. And it came 21 minutes into the bulletin, very thinly sandwiched between Babs Plett-Usher in Bethlehem and Martin Patience in Baghdad.

Shouldn't it have been a lead story, maybe even the lead story, what with it marking a major moment in UK and EU history?

History in the making, despite the BBC, then. And yet more sour grapes?

And late this afternoon, in the hour before BBC One's News at Six, the United Kingdom's Prime Minister, Boris Johnson, added his signature to the Withdrawal Agreement too.

Another landmark moment in history.

Was it the top story on tonight's BBC One's News at Six, as you'd expect?

Nor was it among the other top stories on tonight's BBC One's News at Six. Or even among the minor stories. Or even mentioned in passing.

Not even for 19 seconds.

Extraordinary. And the sourest grapes yet?

History in the making, despite the BBC.

Seriously, dear reader, am I missing something (and need putting down)?

Why, other than for reasons of extreme bias, would the BBC's main evening news bulletin not be reporting this tonight?

Nothing at all relevant to this. Where is she on this?

Further update: I see someone on Twitter is seeing things my way:

David Gregory: What’s happened to the BBC's Katya Adler? No news at all from Brussels?