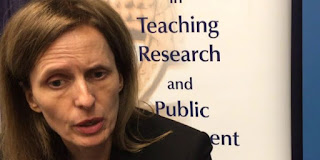 Orla Geurin’s gratuitously appended remark about the Palestinians follows the same pattern as Tim Wilcox’s notorious and equally inappropriate gaffe of an attack-line during a live interview with an  “Israeli-born Jewish woman” after the Charlie Hebdo attacks. Remember?

“Many critics though of Israel’s policy would suggest that the Palestinians suffer hugely at Jewish hands as well.”

Interestingly, the BBC defended Willcox just as they are defending Orla Geurin. Nevertheless, Willcox apologised (for any offence caused) “on Twitter”. I don’t know if Orla will be apologising, but I think not.

People have noted Prince Charles apparently snubbing Mike Pence at the gathering. A video shows HRH passing along a handshake line-up, where he seemed to be avoiding both the hand-shake and eye-contact with the VP. Whether or not this was deliberate is uncertain, but I understand the two men were also seen chatting together, so maybe it was just a moment of clumsiness.

What was deliberate was Prince Charles’s overly chummy meeting with Mahmoud Abbas, the Holocaust-denying Palestinian leader. It makes a mockery of what had been rather a good speech by HRH, and it rather throws the whole thing into a new light. Slightly hypocritical, if you ask me. Cake and eat it.
*******

It’s totally inexplicable that much of the Holocaust-related commemorations avoid mentioning Muslim antisemitism in so many words. Various allusions are made to this in a roundabout way, with artfully camouflaged wording that carefully circumvents the necessity of confronting the oxymoronic aspect of the matter head-on. “We condemn all forms of hate” sounds ok as far as it goes, but sticking “and Islamophobia” onto the end of every lip-service condemnation of antisemitism epitomises cognitive dissonance gawn mad.
******

The ‘very experienced Middle East reporter’ Orla Guerlin is discussed on BBCs Newswatch. It would appear the BBC are more than willing to totally disregard the concerns of the Jewish community. Not sure, based on recent history, if that’s really their best option! pic.twitter.com/YwBAaizBQi
— SussexFriendsofIsrael (@SussexFriends) January 24, 2020


The sparsely attended parliamentary debate on the topic was sad to see. About six of one party and half a dozen of t’other. Speakers condemned antisemitism, but took care to avoid naming a source, a couple with oblique allusions to nameless persons connected to ‘this place’.


******
If you like football, here’s a nice tribute from footballer chappies:


WATCH- Many if the U.K.s biggest football stars including Harry Kane, Gary Lineker, Frank Lampard and Glenn Murray (Brighton player) have come together to make a very powerful and moving video ahead of Monday’s #HolocaustMemorialDay. If you only ever share one thing make it this pic.twitter.com/tJagzcxjiV
— SussexFriendsofIsrael (@SussexFriends) January 24, 2020

******
Meanwhile, the BBC has lost interest in Harry and Meghan thank goodness and all attention has turned to the Corona emergency and Victoria Derbyshire’s shock horror “Axed!”