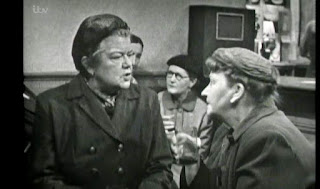 This morning a three-way conversation took place in The Rovers Return between a trio of Trumpophobic Judeophobes. For some reason, it was broadcast on the Today Programme. 2:49

Ena Sharples, Minnie Caldwell and the other one were heard gossiping about a dreadful deal that has been cooked up by two corrupt criminals in order to inflict hardship upon some helpless unfortunates.

One of them sounded like Jeremy Bowen, and the one with acute TDS reminded me of Jon Sopel. The third one was either Gillian Duffy ‘that bigoted woman’ or Mishal Husain. Weird.

If the BBC wants to be taken seriously, then their superficial analysis and knee-jerk rejection of the ‘Deal of the Century’ should at least be counterbalanced with points raised in this article by Elder of Ziyon. In the interest of balance, someone from the BBC should give it the time of day, even if its pragmatic, objective perspective sticks in their craw.


“The most striking thing about the Trump plan is that its goal is completely different than the goal of every previous plan.

Every other "peace" plan had a goal of two states, as if that would magically produce peace. Once two states was achieved, then the job was done. Terrorism, the Palestinian economy, overcrowding in Gaza - none of those were addressed. Day Two after the plan would be implemented was always essentially ignored.

But they don't. History has shown that their desire has always been the ultimate destruction of Israel, which is why they rejected every previous plan that was an obstacle to that goal.”