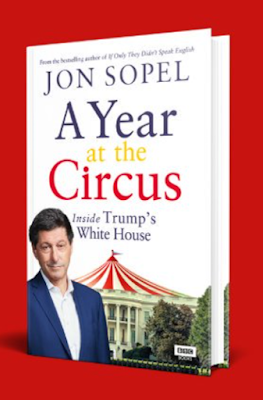 As MB mentioned on the open thread, Jon Sopel's second book written while he's been the BBC's North America Editor is titled 'A Year at the Circus'.

Here's a flavour of it:

"From Kim Jong-un and Kavanaugh to Merkel and the Mueller Inquiry – this is your insider guide to the Washington Circus. Roll up, roll up…"

"Yes, there are things that happen where you do sort of think that maybe Donald Trump is a Bond villain, stroking a white pussycat, while carefully figuring out every move that will ultimately deliver him world domination. But there are other times when this presidency is more Austin Powers than Ernest Blofeld".

"Or maybe if I am going back through by television watching childhood it is more like the Wacky Races. The Dick Dastardly de nos jours careering along some mountain road, crashing into other vehicles, brakes failing, the wheels about to fall off, body parts crumpled, the engine about to seize,  black smoke belching out of the exhaust pipe - but somehow not only does the vehicle keep going, it often emerges as the winner, and out steps Donald Trump, hair unruffled and that half smile, half smirk firmly in place."