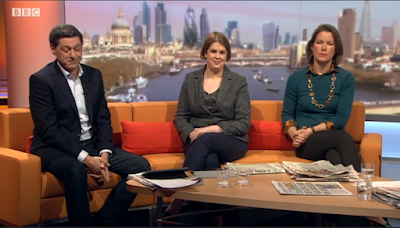 Now to the papers. As I promised, lots and lots of Trump. "Trump accuses Obama of a new Watergate plot", says the Sunday Telegraph. They've also got the story about training that you were hearing about in the news there. 'T levels' the Chancellor wants to talk about rather than 'A levels'. And there's the Sunday Times again - a rather unsettling, unpleasant picture of Donald Trump with his tie blowing up against his comb-over. And then, "Chancellor's £60 billion Brexit fighting fund", it claims. Lots to talk about there later on in the programme. There's the Observer, interesting story here about a watchdog looking into claims that to drill down into voters, information and privacy laws are possibly being broken. Trump again there, shouting. And then, finally, that story in the Mail on Sunday, "Blair's secret White House summit", and it claims that he's going to be Trump's Middle East peace envoy. Before the programme opened, we were actually phoned by Blair's office to say this was not true. Jon Sopel knows a lot more about that story, and we'll be talking to him shortly about it.