"He is not a happy bunny"

There's nothing like a BBC-on-BBC discussion to brighten up your Sunday morning, and this morning's Andrew Marr Show featured Jon Sopel and Andrew Marr (plus ex-BBC Stephanie Flanders) chatting amongst themselves (again) about the man of the moment. 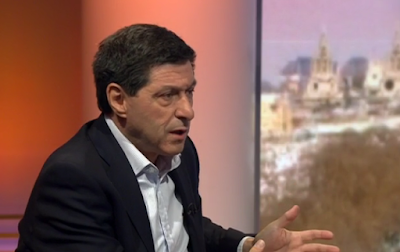 ANDREW MARR: Now Jon, let's talk about President Trump and those tweets. What a story!
JON SOPEL: Extraordinary. It's hard to describe what it is like living in the US at the moment, where you wake up and you think, "I wonder what he's said now". Yesterday was an absolute classic. And I thought it would be interesting to contrast the way the British press are covering it, which is "Trump launches Twitter storm". So this is the Washington Post: "Trump, citing no evidence, accuses Obama of Nixon/Watergate" Just so you don't think it's the liberal media, I'm just going to bring up the Wall Street Journal here: "Trump faces furore over unsubstantiated claim Obama wiretapped him". Of course, the Wall Street Journal owned by Rupert Murdoch. We can carry on. The LA Times now: "Citing no evidence, Trump accuses Obama of tapping his phones during the election". So it seems that even the American media think they have to point out that, "Look, he's said all this stuff, we're going to cover him, he is the leader of the free world after all, but evidence is there none".
ANDREW MARR: And he has called Obama "sick" and "sad" and "bad", and all the rest of it. What is going on? Is this purely an attempt to deflect from his own problems with Jeff Sessions, the Attorney General, under trouble over his Russian links, and so on. Throw something into the social media, everyone will follow it, and they will forget what was going on before.
JON SOPEL: Possibly. He has used that to good effect in the past. But the problems come back to Russia and the links. There's a lot of circumstantial evidence. There's absolutely no evidence of any untoward contacts. But it is just so strange. I mean, the joke going around Washington at the moment is that the Russian ambassador, Kislyak, is the most boring man in the city. Why? Because no one ever remembers meeting him! And that is one of the narratives. Why are there so many meetings with the Russians - and Jeff Sessions, the Attorney General, had two of them that he completely forgot to mention when he was under oath at his confirmation hearing?
ANDREW MARR: Looking from the outside, you'd think that somebody making that kind of, quotes, "mistake" under oath in front of Congress would be out.
JON SOPEL: Well, to use the verb that got currency this week, he has recused himself from any investigation into the link. I think that he's...Andrew, to use a Scottish phrase...I think his coat is hanging by a shoogly peg, I think they say...
ANDREW MARR: Absolutely!
JON SOPEL: And I don't think he can afford any more mishaps. And I think Donald Trump is raging at the world. He is raging in Mar-a-Lago in Florida at the leaks that are taking place, that the Washington Post newspaper managed to find out about the Jeff Sessions meeting with the ambassador. He's raging at his own officials for the way they are handling it. He's raging at the media over the way we're reporting it. He is not a happy bunny.
ANDREW MARR: Stephanie, you've been following this story too. It is one of the most extraordinary moments in modern American political history. We've never had a president behave like this before.
Posted by Craig at 11:26