John Humphrys gets into trouble (twice)


Catching up (and going back in time)... 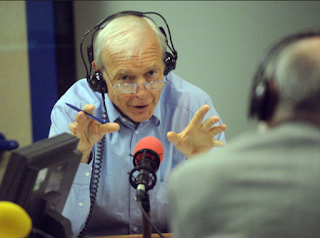 Listening to last week's Feedback (i.e. the 10 March edition) reminded me that there were two other storms about BBC bias the week before last (other than Dame Jenni Murray and Laura K), both involving John Humphrys.


Feedback only tackled one of them though.

The one it didn't cover concerned the rage of Corbynistas at JH's interview with Labour shadow education secretary Angela Rayner on Wednesday 8 March. They accused him of haranguing her, interrupting her too much, trying to put words in her mouth and being patronising.

That's the kind of complaint which holds no water though unless it can be proven to be part of a trend of bias across a large number of interviews - unless it is truly outrageous bias.

Moreover, that kind of one-off complaint tends to come from partisans who don't like their side being given a hard time and, therefore, doesn't deserve to be taken seriously.

A week or so earlier Nigel Farage had received the full John Humphrys treatment too, being 'belittled', getting asked the same question again and again, being interrupted incessantly and being led to 'confess' to something. It was all personal stuff. A one-off complaint about that which didn't set it in the context of years of such interviews would merit the same dismissive treatment too.

The BBC would rightly reject both complaints and claim that the Today veteran treats all sides equally badly. They might even say that John will be John (to borrow a phrase from Tony Blair).

And they could very well be right about that. He does seem to like to argue with anyone and everyone.

Mark Rowley: We know it was extreme right-wing related issues which led to the tragic murder of Jo Cox not that long ago. So...
John Humphrys (interrupting): So,,.in that case, wasn't that just a very deeply disturbed man really? Mentally ill, wasn't he? It slightly muddies the water, doesn't it, when we talk about that as terrorism? It was a murder, wasn't it?
Mark Rowley: That's not my classification. That was the view of the court and the sentencing. That's the conclusion they came to,

The featured listeners to Feedback condemned JH for "inaccuracy", "sloppy journalism", and "muddying the waters" himself over the issue of Islamist v far-right terrorism by (apparently) equating terrorism purely with Muslims and (apparently) dismissing the white supremacist aspect.

He was, essentially, being accused of behaving like some of the commenters I saw on some right-wing blogs in the aftermath of Mrs Cox's murder.

Roger Bolton then played a typical (and very brief) BBC response from the Today programme, basically asserting that the interview was fine and had nothing wrong with it whatsoever:


Listeners expect robust and challenging questioning and John was establishing whether the murder of Jo Cox should be equated to other recent terrorist acts. Mark Rowley made it clear that the view of the court and sentencing was that Jo Cox's murder was an act of terrorism.

Roger Bolton said that Feedback had then asked listeners (doubtless via social media) for their reaction to the BBC's official defence, and the word that kept cropping up in their responses was "disingenuous". Further condemnation of John Humphrys followed.

They should have just admitted he got it wrong and moved on.

The fact that they couldn't even bring themselves to do that speaks volumes about the BBC's deeply ingrained defensiveness.
Posted by Craig at 08:08