The political earthquakes during the last few days have been too numerous to mention. Philip Hammond’s screeching U-turn, for which Norman Smith provided the sound-effects, Nicola Sturgeon’s annoyingly ill-timed second referendum announcement, eagle-eyed Laura Kuenssberg’s percipient warning of the Tories’ broken manifesto pledge, which propelled everyone’s NICs into a twist.

We don’t automatically take a negative view of everything we see on the BBC, and I thought the item on Victoria Derbyshire’s morning show about Alexander Blackman’s conviction for murder being reduced to manslaughter was interesting and balanced. I thought the discussion between ‘heart’ (the emotional statements made outside the court) and ‘head’ (former soldier, author and barrister Patrick Hennessey in the studio) was helpful and thought-provoking. Victoria Derbyshire read out a very critical (of her and her show) message from a viewer, and said to the camera crew, as a rather contrived aside: “stop laughing”, which I have to grudgingly admit was quite amusing. I understand the topic was covered in a Panorama, which I missed, but here is the BBC’s web report.

Here at ITBB however, we’ve been inexplicably silent.

Oh well. One thing I did watch the other day on The Daily Politics was Rod Liddle, their daily guest, reduced to as much laughter as his smoker’s cough would allow by a feminist. (I think that's what she is.) It occurred towards the end of a long overdue discussion about universities, no-platforming and free speech. 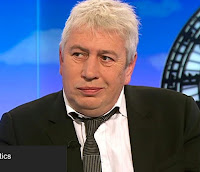 The age-old argument about freedom of speech has reared its head again, currently centred around academia after a spate of politically correct no-platformings and safe-space issues has threatened to undermine the entire university ethos.  A place of ideas and debate.  (funny that Andrew Neil hadn’t heard of Maryam Namazie - I always assume people like him know all about such things)

The funniest bit was when Rod Liddle found himself sitting next to author and commentator Kaite Welsh who said that true freedom of speech involves accepting no-platforming as one of its own consequences. Rod Liddle found that hilarious. As did I, although I do see that there is more than a grain of truth in there. Still funny though.