Put the damn thing down!


While away from the computer this week I read a long book on Abraham Lincoln and his cabinet. I loved the book and couldn't put it down, setting aside whole evenings to finish it off. Howard Jacobson would have approved of the reading but not, it appears, of the rushing.... 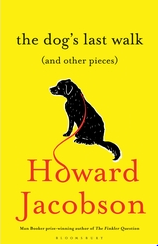 Justin Webb: Time for Jim's 'Meet the Author' interview - this week Howard Jacobson on a portrait of an ailing dog and finding inspiration in the smallest of things...
James Naughtie: Howard Jacobson is a serious novelist who's also a very funny one. He's won the Man Booker Prize for Fiction and the Everyman PG Wodehouse Prize for Comic Fiction twice - and no-one else has done that. His latest collection of columns written for The Independent is called The Dog's Last Walk. Now, I want to ask you about the title because it is also the title of the first column in the collection, and it's a very melancholy tale, and a very touching one. Just tell people what it describes.
Howard Jacobson: I was sitting in a park in Marylebone and I watched an elegant middle-aged woman walking her dog - a big black labrador - and he was slow, and he looked to me as though, from his demeanour and hers, this was their last walk together. He'd lived a long time, it was over and she was giving him his final outing. And his weariness and her grief were palpable. And I was either going to dissolve in tears or write something about it...
James Naughtie: Or both.
Howard Jacobson (laughing): Well, yes.


James Naughtie: Let's hear a description of the dog. This is what you saw:
Howard Jacobson (reading): He walked with agonising difficulty, his hind legs arthritic, his back a terrible burden to him. It was as though will alone kept him upright. He was barely able to round the mausoleum, and kept stopping. With each tired step he took, his owner stooped to say something to him and patted his head. Laid her hand upon him would be a better way of putting it. A long, infinitely gentle touch, as though to lend him some of her vital spirit. Whether she was urging him to get up and walk a little further, or telling him he could just sit down now in the gravel if that was what he wanted, take his final rest there and then, I couldn’t hear. But by some agreement they reached a bench where they could pause: she on the seat, he, folded under himself, at her feet.
James Naughtie: It's a very good example of the way that a column or piece of writing, a short story, can spring from one little flash on the retina, one scene, a lady and a dog just passing in front of you, and you're away. That's what writing is.
Howard Jacobson: For me, that is the way of it, that you see a little thing and then you see where it will take you. You don't start big, you start small. I've often thought the writers who start with the biggest things end up producing the smallest thing. You can get to the biggest questions on Earth by starting with next to nothing, and a dying dog is a good starting point...
James Naughtie: Because you're quite weepy, aren't you?
Howard Jacobson: I was hoping it...I confided in you once that was the case and I thought that wasn't going to be public. I've spent most of my life concealing that. That's probably why I became a comic writer - though I hate being called 'a comic writer'.
James Naughtie: When you pick up a writer that you adore or admire, what is it that's feeding your imagination and your emotions?
Howard Jacobson: Well, it's always the language. It isn't the story. I don't give two hoots about a story really. Two of my favourite writers...Dickens, it's the flamboyance, it's the extravagance, it's that feeling he give you that the novel that you're getting, there's "I could have given you another one", that plenitude. The other pleasure I get is Henry James, or a late Henry James, where things can be too perfect but the joy is...
James Naughtie: And slow, deliberately slow.
Howard Jacobson: And that's lovely to read as though "I have a whole life left to finish this book, and if I do nothing else I will finish this book". What's the hurry? It's often said by people, "I love this book. I couldn't put it down." Put the damn thing down! I want my readers to put me down after every paragraph, have a little think, have a sob, have a laugh, get angry, put me down. There's time. Reading is...we've run out of time. People won't expend time on writing any more. What's the rush? What are we doing that's so important? Looking at our phones when we could be reading, savouring, that first paragraph of The Golden Bowl again and again and again.
James Naughtie: Howard Jacobson, thank you very much.
Posted by Craig at 09:15