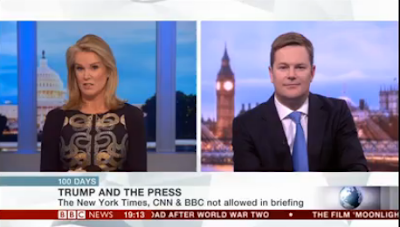 Tonight's 100 Days featured a classic, cosy interview between two BBC reporters and a CNN reporter about how badly Donald Trump is behaving towards the media - with mutual reinforcing laughter at each other's digs at the US President.

Plus, echoing Nick Robinson yesterday, Christian Fraser invited further criticism for Amber Rudd over her use of language.

Quite how the BBC think their viewers perceive this level of smugness I can only guess.

KATTY KAY: The feud between Mr Trump and the media keeps growing. On Friday several news organisations, including the BBC, were excluded from a White House press briefing.
CHRISTIAN FRASER: Then on Saturday the President announced he wouldn't be attending the White House Correspondents' Association Dinner.
KATTY KAY: The media received support from an unlikely source today - the former President George W Bush.
CHRISTIAN FRASER: Not only did he say that "we all need answers'' on the extent of contact between Donald Trump's team and the Russian government, he also had this warning for the President over his criticism of journalists.

GEORGE W. BUSH: I consider the media to be indispensable to democracy. We need an independent media to hold people like me to account. I mean, power can be very addictive, and it can be corrosive. And it's important for the media to call to account people who abuse their power. Whether it be here or elsewhere. One of the things I spent a lot of time doing was trying to convince a person like Vladimir Putin, for example, to accept the notion of an independent press. It's kind of hard, you know, to tell others to have an independent free press when we're not willing to have one ourselves.

KATTY KAY: George W. Bush speaking earlier. And, by the way, Christian, some people here are suggesting that George Bush has been more critical of Donald Trump in one interview so far than he was of Barack Obama over the course of eight years. Let's get more on this relationship with the press with Frank Sesno - who spent more than two decades at CNN, where he served as White House correspondent, anchor, and Washington Bureau Chief. He's now the director of the School of Media and Public Affairs at George Washington University. Frank, why is the President ratcheting up this war of words - and actions, indeed - with the American press now? And will it work?
FRANK SESNO: Well, why is the ratcheting it up? It plays to his base. There is a tremendous traction for blaming the media in this country among conservatives and others who really do believe that there is a very liberal press that is hostile to this president and hostile to conservative values generally. Secondly, it deflect attention from some of the stories that would otherwise be gaining traction about the disarray and disorganisation in his White House, despite the fact that they say it's running like a well-oiled machine. It is not - and people who have been through transitions in the White House before will freely say so. Republicans and Democrats alike. Finally, it is a message that allows, I think, the President to try to inoculate himself from setbacks and criticism to come. The more you demonise or marginalise the media, the less, in this way of thinking, the media may factor in down the line. That being said, huge criticism is proper for the media. That's out there. It's the way he's going about it, the personal vindictiveness, and going as the former president said, in an institutional way against a fundamental pillar of the democracy.
KATTY KAY: Frank, as we were suggesting earlier, the American press's reputation is not particularly strong. You have alluded to it. But I did see one poll that showed that actually the media is more popular at the moment than President Trump. That's quite a feat for the President Trump (sic) to have achieved that! [Frank Sesno laughs]. Is there a sense, do you think, that this might be producing a bit of a backlash?
FRANK SESNO: Yeah. I mean, it is phenomenally ironic. Donald Trump is the ultimate media irony. [Katty Kay laughs]. He is a media creation who ran against the media to be elected. He has been railing against the media since it's been elected, and now the media are showing signs of rebirth and real mission. And it was a Quinnipiac poll that you cited, and more Americans said they trusted for credibility the media than the President of the United States. It's a dangerous game the President is playing. 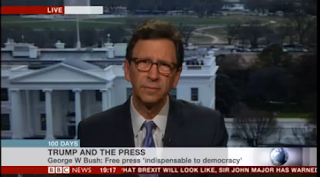 CHRISTIAN FRASER: Sorry Frank, I was just going to say, there's obviously a lot of concern a swell within the White House, not just about the press but about the leaks to the press, that was particularly taken by one quote today in the New York Times from Sean Spicer, the communications director, who says if this fight against leaks is leaked, then there's going to be big trouble. [Katty Kay laughs]. And of course, it was leaked. But they clearly have big problems with leaks. Does that say a little bit about how the administration is being run?
FRANK SESNO: Yes. Having covered other White Houses, the more competition there is in the White House, the more power centres, the more leaks there are. And so I think that is what they are experiencing now. They also rail against anonymous sources. And yet the budget briefing that the Office of Management and Budge did today, they insisted on being anonymous, their names were not attached with it. Welcome to Washington! Washington is a town that leaks, there are a lot of people here who know a lot of people. It's easy to leak without getting caught. In fact, we have whistle-blowing protection in this country that protects people leaking information about wrongdoing. So this just goes with the territory. They will have to get used to it.
CHRISTIAN FRASER: One of the stories in the British press today is that Amber Rudd, our Home Secretary, has been using the term 'fake news' to describe criticism that she doesn't like. How corrosive, do you think, that term is?
FRANK SESNO: Very corrosive. Very, very corrosive. This is one of my biggest concerns as a journalist, former journalist and an educator now, because we're confusing the public with this. Fake news is deliberately, maliciously, completely fictitious creation of information to mislead and misdirect. News you don't like, including unfair or sensational reporting, may be irresponsible news. But it's not fake news. Fake news is exploding around the world, and eople need to be informed about it. And people in public life should be joining with news organisations to figure out what fake news is and how the public needs to distinguish from it. We should be wanting a public here, on all sides, that is informed with real facts.
KATTY KAY: Frank Sesno, thanks very much for joining us.
Posted by Craig at 22:11