I've always rather liked the philosopher A.C. Grayling, and have one book of his on my shelves. Alas (unlike Zeno of Citium) he's no Stoic, and his tweets, in particular, have manifested a massive lack of stoicism in the face of recent events (since Brexit). Today the great man gave forth the following Epicurus-like epigram in reply to someone tweeting that "Trump is unfit to serve":

Alas, pretty much every response he's received on Twitter so far has been negative. It's as if he's Thrasymachus and dozens and dozens of Socrates-like gadflies have all suddenly descended upon his luxurious locks and begun furiously biting his philosophical head, accusing him (among many other things): of promoting hate, of contempt for people who don't thing like him, of using Nazi-like language, of displaying bile, of lacking a sense of balance, of being hysterical, of being "really off his rocker these days", etc, etc. (Others have been less kind). 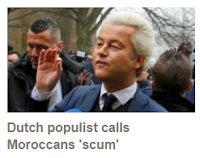 Meanwhile, Geert Wilders (a man blessed with no less luxurious locks than our very own hyperventilating professor) has called some Moroccans "scum", according to the BBC. Not a Sheep, among others, isn't overly impressed with the BBC's home page headline (see above) about that story: 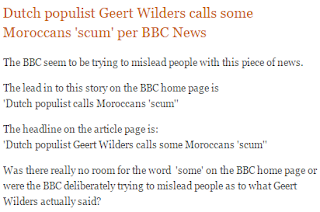