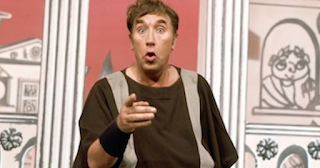 As the BBC website appears to have stopped providing transcripts of Radio 4's A Point of View, the following pair of posts preserves for posterity a couple of very interesting talks by the philosopher John Gray.

As they largely go against the entrenched left-liberal bias for which A Point of View used to be known (as we chronicled here at ITBB) - at least until they added Roger Scruton to the cast-list - it feels only right to offer them as counter-examples, or as exceptions that (mostly) prove the rule.
Posted by Craig at 07:00