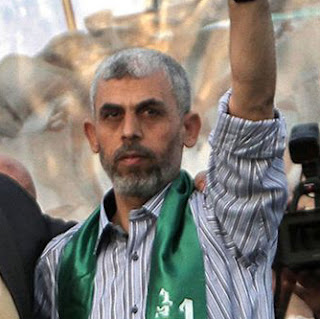 Compare the BBC’s report of the newly elected Hamas leader (Yehiya) Yahya Sinwar (what a name!) with other press reports available online.
The BBC’s avoidance of the ‘value-judgement’ is so painfully obvious that it has the opposite effect to the one intended, i.e., it ends up looking like unadulterated bias.

The BBC does mention that Sinwar represents the most radical and extreme line of Hamas, and does not believe in any sort of cooperation with Israel, but much of the BBC’s report is couched in obfuscating language, for example, rather than explain that Sinwar was jailed for murdering Palestinians who collaborated with Israel, they say:
“Yehiya Sinwar was jailed for four life terms by Israel in 1989 for a series of offences, including murder and kidnapping.”

“Jailed by Israel” almost casts doubt on the validity of the charge, and let’s face it, if you’re not even going to mention his attitude to Isis it almost looks like a cover-up.
The Times’s Israel-based correspondent Gregg Carlstrom is not known for his pro-Israel stance, but his report about Yahya Sinwar is even headed “ New Hamas leader will court Isis”