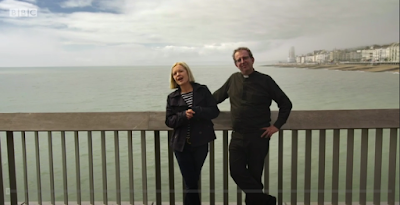 I've never seen a single episode of Great British Bake Off or MasterChef, but I have been watching The Big Painting Challenge on BBC One.

It's the sort of programme that a few years back would have been automatically presented by Rolf Harris. No ifs, no buts. BBC One and Art was Rolf and only Rolf for several years. Not even Sister Wendy could get a look-in on BBC One. It was Rolf, Rolf, and yet more Rolf. (Though a certain Mr. Yentob used to get a late evening slot every so often too).

For some reason, Rolf - now known as 'Harris' - is no longer on the BBC, so it's the Rev Richard Coles and Mariella Frostrup presenting instead.

(It has to be said that neither has a catchphrase to match 'Can you tell what it is yet?' or that heavy-breathing thing Rolfie used to do).

The format is straight out of GBBO - and all the rest, ad infinitum: contestants (some with moving back stories), mentors, judges, a public vote, and a weekly eviction - plus plenty of BBC diversity.

For two weeks in a row 'the public' (namely a few people invited in by the BBC) went for the largely abstract piece by the pretty young woman (#everyday sexism) - the one my elderly parents think is, by a long way, the worst of the lot. I rang them tonight to check up on their take and, yes, they described it as "rubbish". 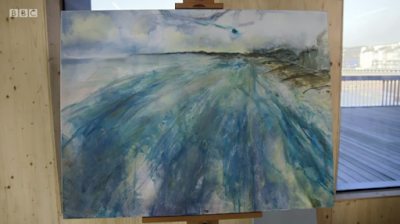 I was more taken by it (lovely colours, striking effects), but I'd have chosen several other (more naturalistic) paintings before it myself.

Of course, one contestant got voted out. I don't usually think of myself as a 'non-competitive sports' type but the brutal stupidity of this cookie-cutter BBC format strikes me as distasteful. It's all a game, but it's people's deepest feelings that are being held up to public embarrassment here, and I don't like it.

I shall now melt, snowflake-like, away - though I might tweet my disgust to the world first. #benicetohedgehogs.

I did like the look of Hastings though. It's obviously somewhere that offers much, much more than merely the opportunity to fight off Norman invaders.

Update: Not on The Big Painting Challenge, but here's a 1936 painting of Marine Court in Hastings by Raymond Myerscough-Walker. 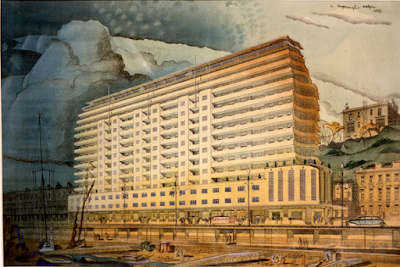