If my Twitter timeline (which deliberately contains a variety of viewpoints) is anything to go by it's been a topsy-turvy day, politically.

My favourite 'topsy-turvy' moment of the day was seeing this headline for the latest Guardian editorial:

Watching tonight's 100 Days on the BBC News Channel also gave me a bit of a 'topsy-turvy' feeling as the BBC's Nick Bryant began sounding as if he though the Tea Party might have had a point after all!

It's a reasonable-sounding analysis, albeit a very unexpected one from a BBC reporter like Nick Bryant.

(Cynics might think he's cynically advancing such an un-BBC argument only to undermine President Trump).

The following transcript, incidentally, highlights a lovely use of the "But to many people..." (degrees of separation) formulation that, as the interview goes on, quickly reveals itself to actually mean "But to me, Nick Bryant..." 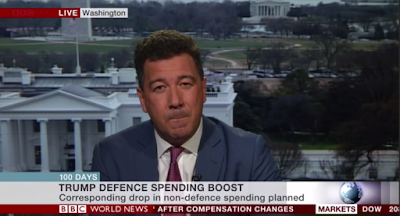 KATTY KAY: What does Donald Trump want his first budget?
NICK BRYANT: Well, it's clear he wants...what he's called an historic rise in defence spending. 9% - that's an absolutely massive amount. He wants, along with that splurge on military spending, to have this binge on infrastructure as well. One of his key campaign promises was to rebuild America's roads, its creaking bridges, its rundown airports that often, in places, look like they're from the Third World. And he's also said he can make these savings by cutting things like spending on the Environmental Protection Agency, and also the State Department, the foreign aid budget for instance. But to many people, these sums just won't add up, because he says he wants to have tax cuts, he says he wants to have all this big spending, big-ticket items like the wall, etc. But one thing they've signalled they're not prepared to touch is so-called entitlement spending, which accounts for about 80% of the federal budget, on things like social security, medicare, paying down the federal debt. It's what we call 'autopilot spending'. It's spent already, as it were. So the sums just don't seem to add up with this budget.
KATTY KAY: So Nick, I'm young enough to remember, as are you, the days when Republicans were deficit hawks, when what they really wanted to do above anything else - it was almost an issue of values and patriotism - was balance the US budget, cut that deficit down from its existing $20 trillion. It doesn't sound like President Trump is remotely concerned about deficit spending.
NICK BRYANT: You've got historic problem here, Katty. The national debt right now is 77% of gross domestic product. I mean, that is huge. That is unmanageable. And although this huge increase in defence spending might sound like music to the ears of the kind of a foreign policy hawks on Capitol Hill, the people with the louder voices in recent years, especially in the Republican party, have not been the defence hawks, they've been the deficit hawks. And you can see here the problem, a political problem, for the White House. Up until now, the Congressional leadership, Mitch McConnell in the Senate, Paul Ryan in the House, the House Speaker, the Republican House Speaker, they've gone along with what the White House has done. They've been very acquiescent. But here, there might not. It's setting up this sort of battle somewhere down the road between the White House and figures like Paul Ryan on Capitol Hill, who for years have been saying, "We've got to take control of the national debt and that means tackling entitlement like social security".
CHRISTIAN FRASER: And Nick, with that in mind, would they have to blow the spending cap that was put in place in 2011?
NICK BRYANT: Well, it looks like it at the moment because, as I said, the sums just don't seem to add up. If Trump gets his way and gets his budget through Congress...To give you an example, Christian: If you zero down foreign aid...it's just 1% of the budget...it puts a small dent in bringing down what is a ballooning national debt. At the moment, there's a discrepancy of $600 billion each year between the amount of money the federal government spends and the amount of money it raises through taxation, and that figure is going to balloon out over the next few years because of the increased costs of social security and medicare. So again, you know, this just seems like fuzzy maths and voodoo economics, to use a phrase from the past.
Posted by Craig at 22:11