A breaking story that's not on the BBC News website's home page or on its UK page (it broke about 3 hours ago) is the jailing at the Old Bailey this lunchtime of Mohammed Mayow and Mohanned Jasim on terrorist offences. The story can be found, however, on the BBC's England page. Just. 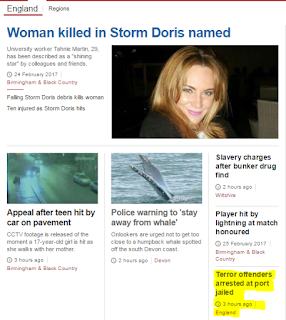 The BBC's account is lacking in some of the important details you find in, say, the Daily Express's account. (h/t DB).

The Express, for example, reports that the judge in the case "expressed her surprise at the Home Office giving a terrorist a UK passport just days before he tried to travel to the Middle East".

As well as quoting the judge, the Express says:

Instead, he was granted UK citizenship and given a passport.

Just one week later he was stopped by police at Dover with fellow Jihadist Mohammed Mayow.

There's nothing about any of that in the BBC's report.
Posted by Craig at 14:46