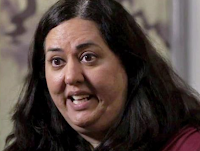 In other BBC news, the BBC has announced a new commissioning editor for ethics and religion (The Times, so £).

Fatima Salaria will take over the responsibilities for religious programming on BBC TV previously carried out by Aaqil Ahmed.

Ms Salaria will be the second Muslim in a row to run BBC TV's religious output.

Her appointment was overseen by James Purnell.

The Daily Mail doesn't give her a warm welcome:

In response to criticism that a Christian wasn't appointed, a BBC spokesman says:

People should be judged by their ability to do the job, not their religious background. Fatima was appointed as she is an extremely talented commissioner. We’ve strengthened our focus on religion and ethics within television and have been clear that we plan to do even more to reflect the role of religion in modern Britain, with Christianity at the heart of our coverage.

That may be disingenuous, however, given that her previous appointment as an assistant commissioner was explicitly promoted as being part of the BBC's "diversity drive" by the BBC itself.
Posted by Craig at 12:15