Giving yourself the last word

As I was driving to work yesterday I heard Jon Sopel telling the Today boys (Justin and John) about his big moment with Donald Trump. The lads were all agog. Then on came Peter Oborne and complained about BBC bias and how smug Mr. Sopel had sounded just then, and the Today boys sniggered and fell about laughing at every one of his accusations. Justin then gave himself the last word (defending the BBC against Mr. Oborne). Such larks!

And talking about giving yourself the last word, Jon repeated his own 'last word' from yesterday's News at Ten in a BBC website article, which closes:

Plus here, incidentally, is a reminder of what Jon Sopel told Roger Bolton on last October on Radio 4's Feedback: 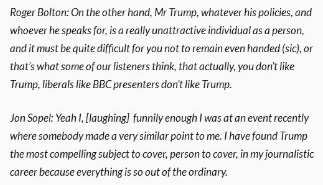