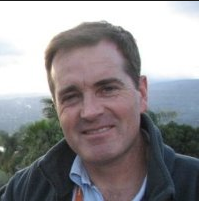 From this lunchtime's BBC One News at One came this report from Richard Lister. It wasn't entirely free from editorialising:

Richard Lister, BBC: But it's the President who calls the shots, and he uses Europe as a model for all that's wrong in the world - even if he has to make up his own facts to fit the argument.

Donald Trump: You look at what's happening last night in Sweden - Sweden! Who would believe this? Sweden! They took in large numbers and they are having problems like they never thought possible.

Richard Lister: There was no such incident in Sweden. The country has taken in large numbers of refugees and hasn't suffered any terrorist attacks as a result. But the policy's not without its Swedish critics.

Swedish man on Fox News: I think we were caught off-guard.

Richard Lister: The president said later he was referring to this Fox News report, claiming that violence has risen in Sweden along with refugee numbers. That claim, too, is questionable. But Mr Trump's backers insist his points are valid.

Dr. Jan Halper-Hayes: People seize upon it and you see these articles, and when I pulled it up on Google, it's like, well, Donald Trump was really right. There were the neo-Nazis going to the refugee camps, and there's been a lot of corruption and rape going on.

Richard Lister: That's not the message Mr Pence is pushing, but President Trump's voice is louder and Europe is unsettled. On the streets outside his meetings, these protesters are sending a message of their own, that the values of the Trump administration are not welcome in Europe. That's a debate which is getting even more personal in London as members of Parliament consider an online petition signed by almost 2 million people suggesting that Donald Trump's state visit to the UK would cause embarrassment to the Queen. Richard Lister, BBC News.