Complaining about things the BBC doesn’t mention may seem like a hiding to nothing; to prove a negative is to embark on a mystery tour; destination bottomless pit.

Since the BBC is supposed to be a primary source of information, for many viewers and listeners at any rate, constantly omitting a particular type of story begins to look deliberately misleading. 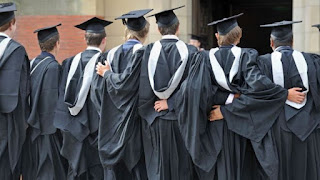 Recent news that antisemitism is on the increase has been reported on the BBC - but usually twinned with “Islamophobia”.  The definition is left "vague".  Swastikas painted on buildings or vandalised Jewish cemeteries qualify as antisemitic, but what about the anti-Israel tsunami currently engulfing British universities?

Tap “Israeli Apartheid Week," or assorted variations into the BBC’s search engine and all you get is a piece about Jewish students denying the problem.  Maybe simply a flaw in the BBC’s search engine?
Israel Apartheid Week has become so embedded in university culture (an annual event, now) that perhaps it’s not considered newsworthy. However, the fact that a handful of universities have cancelled some of the events should be on the BBC’s radar, surely.

Michael Gove recognises antisemitism when he sees it. The government has also raised the issue. 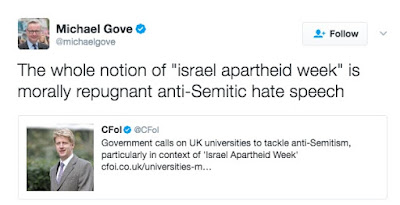 You’d think the BBC might have noticed it, wouldn't you?

A glaring error an alleged “Prevent” crib sheet, posted on this Harry’s Place thread stood out like a sore thumb.
Number 5 on a bullet-pointed list of supposed warning-signs of extremism’  states: “Opposition to Israeli settlements in Gaza.”
Anyone paying attention will be aware that all Israeli settlements in Gaza were dismantled in 2005. If that is really the standard of prevent’s research, I despair.

Exeter University has cancelled a checkpoint stunt, which surprised me, as Exeter is known for its Saudi-funded Islamic studies department, and it’s where Illan Pappé and Ghada Karmi, both virulent anti-Zionist campaigners, are based.

King’s College London and University of Central Lancs have also cancelled events.
Someone tell the BBC.

Rod Liddle has written a few words on Nikki Haley’s speech at the UN.
To many of us she was stating the bleeding obvious. The UN is biased. The below the line comments have been colonised by antisemitic trolls. 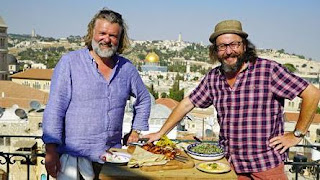 The other day the BBC aired the edition of the Hairy Bikers foodie trip to Israel. It was nice to see a non-political and upbeat story about Israel on prime time BBC. It kept away from politics, save for one indirectly political item about a Palestinian/Israeli youth project, sport bringing people together kind of thing. Wouldn’t you know it - certain people objected. And someone tweeted “Shame on you”
Unbebloodylievable.

I thought Ken Livingston was suspended from the  Labour Party? Shouldn’t someone tell the BBC? Or has he been quietly reinstated? Why are they still using him as spokesperson for the current Labour party leadership question?

Rory Bremner has been dusted off. He’s been doing the rounds with a Trump impersonation (who hasn’t?) and a rather feeble Farage.

I wonder if he’s got a Corbyn one? Those little sniffs and intakes of breath, the repetition and the scratchy, irritable tone should be a doddle for a mimic. I don’t think John McDonnell would be a problem either - smooth, patronising and slightly nasal. How hard can it be? I presume mocking socialists is a step too far.