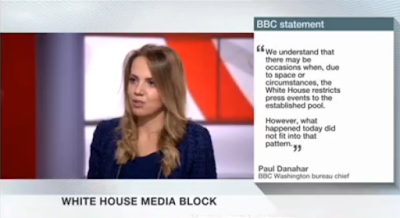 Watching the BBC News Channel about an hour ago, it's clear that the BBC are neither hiding their displeasure at the Trump administration's "media block" [as they are captioning it] nor taking it lying down.

They have broadcast a 'gotcha' clip of Sean Spicer back in December being interviewed by "the news agency Politico", as Maxine Mawhinney called them. [Is Politico actually a 'news agency'?]:

There is a big difference between a campaign where it is a private venue using private funds and a government entity. And I think we have a respect for the press when it comes to the government, that that is something that you can't ban an entity from, conservative, liberal or otherwise. I think that's what makes a democracy a democracy versus a dictatorship, so I think there is a vastly different model when it comes to Government in what should be accepted and that is on both sides.

Maxine put a lot of expression into pre-announcing this, saying "he said that barring media from government press briefings is [horrified tone] what dictators do".

She then interviewed Silvia Borrelli, the London Politico reporter, noting that "Politico was one of the media organisations barred from the White House press briefing - [turning to camera] along with us, the BBC, as well."

Silvia was not at all happy at what the White House has done, and Maxine didn't exactly make much of an effort to play devil's advocate either, saying things like:
Captions of media statements protesting the 'media block' ran across the right-hand side of the screen for much of the interview.

P.S. Laura Bicker's report just before this - repeated every hour - calls the President's conference comments on the media a "tirade".
Posted by Craig at 12:09