I haven’t quite finished with TBQs yet. Did anyone else wonder what the bearded would-be polygamist Azad Chaiwala thinks about homosexuality? Only, when he justified his desire for multiple wives (because he was “born that way”, ) did he even realise that he was appropriating “the Gay argument”. 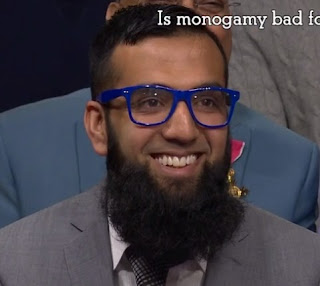 Mustn’t laugh, but he was seated next to Guardianista Dawn Foster, another of the BBC’s current favourite social affairs commentators.


Would the wives be fighting for more of his attention or less of it, one wonders. I quite hope he gets his way, and the wives gang up on him having inevitably realised what a plonker he is.
Posted by sue at 16:09