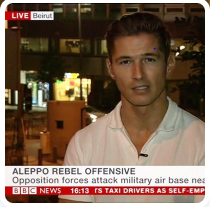 The Mail on Sunday has a BBC story today about a BBC reporter, James Longman, "using his role at the Corporation to get a date": BBC 'Beirut Beefcake' seeks a love story by posting screengrabs on Tinder of himself reporting on Syria. The piece, in passing, includes the following information:

James was ticked off by the Beeb last month for breaking their social media policy after he shared an Instagram photo comparing Donald Trump's press conference to a speech by former Libyan dictator Colonel Gaddafi.

So, they do still get a rap on the knuckles for displaying bias on social media platforms it seems. A previous Mail article says "James was hastily 'reminded of BBC policy'", before ending:

His excuse? He was merely commenting on the coherence of the speech, not likening Trump to Gaddafi. Nice try James!

If James Longman got a ticking off for that then surely dozens of other, often high-profile BBC reporters should have very sore knuckles by now, given the way they've been carrying on on Twitter recently?
Posted by Craig at 08:00